Since the 1850s, only four families have called 122 South Franklin Street home. The first two families built and expanded what is in many ways a monument to American architectural and scientific innovation. A third and fourth family, who sought to restore and preserve this significant piece of local and national history had shorter tenures. Back on the market, the Ross-Hand-Porter-Brodsky mansion seeks family number five.

Architect and builder Azariah Ross acquired the land where he built this enduring great home from Garrett Tallman for $5,000 in 1856. Ross had interests in projects that shaped an American landscape being transformed by the materials and wealth of the Industrial Revolution. He was instrumental in extending the Northern Railroad to Nyack, erecting the stone bridges that transect New York City’s Central Park and the stone retaining wall surrounding the United States Military Academy at West Point.

The home that Ross built in Nyack is the product of the ideas and designs of the great landscape architect, Andrew Jackson Downing. Downing was hugely influential in American residential and public architecture in the early 19th century.  Calvert Vaux and Frederick Law Olmstead, who built and designed Central Park, met in Downing’s Newburgh home. The Gothic Revival style of the home that Ross built is animated by Downing’s belief that architecture and the fine arts could elevate the morals of a property’s owner.

Ultimately, Ross’s stonework in Central Park proved sturdier than his finances. From 1871 until 1882, the Franklin Street home was heavily mortgaged and became the subject of litigation between his heirs after his death. For a brief period during this interval, the property was operated as the Smithsonian Hotel, a name that may have been selected as homage to Downing and Vaux’s work on the Washington museum of the same name. In 1883, Mary H. Hand purchased the home at auction.

Mary’s husband, William H. Hand, was well suited to rebuild the property that had been turned into a near ruin by vandals. The son of a cabinet maker, William H. Hand established a firm that specialized in decorative woodwork that would eventually employ his sons William B., Roger and Walter. Together and separately they were engaged in construction projects including The Manhattan Beach Hotel in Coney Island, The Princeton Library, the Museum of the City of New York, The Fogg Museum at Harvard and numerous mansions in New York City and Newport, Rhode Island.

Mary H. Hand was a vigorous manager of the affairs of the house that included a working farm and a stable. She was known to carry payroll and supplies to her husband’s workers in Manhattan Beach by horse and buggy.

Upon her death in 1917, the home was left to her daughter Mary E. Hand, who lived there until 1955. Mary E. Hand left the house to her nieces and nephews, who shared the home. Raymond Hand was a photographer who documented the Dutch inspired architecture of Rockland County; Dorothy Hand Park Crawford earned a degree in Interior Design at the Parsons School of Design, and William H. Hand, was a noted scientist and inventor.

When William H. Hand died in 1978, he was described by the Historical Society of Rockland as the last surviving personal research assistant to Thomas Alva Edison.

From a laboratory in the barn where his great-aunt kept her horses, Hand improved on the standard battery design, creating a unique power source with a 15-year life. This significant technological development made his battery popular with the military and police and fire departments.

Before Hand’s innovation, batteries relied almost exclusively on the locomotion of the engine to generate and hold the charge. Hand’s research in electro-chemistry created a battery that held a charge allowing a vehicle to reliably go from a stationary position to  high-speeds, a valuable asset in crime fighting and combat.

Sarah Porter and her husband Tom Watts purchased the house from Dorothy Hand Park Crawford’s daughter Adelma in 1999, continuing the legacy of female stewardship of the property. During the sale, Porter learned that there was another bidder that wanted to demolish the home and build over 30 condominiums. Subsequently, they initiated talks with the Village of South Nyack to preserve the historic house through new provisions in the local zoning ordinance. 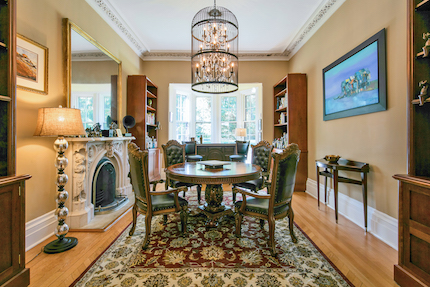 As a result of Porter’s negotiations, the parcel cannot be broken into smaller lots and there are new economic uses permitted on site including the establishment of a bed and breakfast, art gallery, spa, conference or retreat center.

The length of Porter’s tenure might be significantly shorter than the previous two stewards, but it is of major consequence to the legacies of the Ross and Hand families and all of the ideas and inventions enshrined in the building and grounds. Unlike many who seek to leverage real estate investments for profits by selling to the highest bidder, Porter’s commitment is to preserve the Hand House for future generations.

Porter’s altruistic actions are consistent with Azariah Ross’s work on public projects and the philanthropic traditions of the Hand family. William Hand donated the land across from the Hand ancestral home where the Village of South Nyack built at public park and firehouse. This house provides evidence that Andrew Jackson Downing may have been right when he said, “If they can decorate and build their homes to symbolize the values they hope to embody, such as prosperity, education and patriotism, they will be happier people and better citizens.”

Porter eventually sold to Dennis and Noah Brodsky in 2014, who moved to the Hand House from an apartment in Manhattan, having previously lived in Upper Nyack. During a visit to South Nyack Village Hall when they moved in, the Brodsky’s mentioned to Village Clerk Sally Seiler that they were interested in getting more involved in the community. A few months later, Rivertown Film gained access to the entire estate to hold a Hitchcock-themed costume gala.  My fiancé, Marisol Diaz and I attended as Jimmy Stewart and Grace Kelley from Rear Window.

In the generational game of musical chairs that is real estate, this property that presides over South Franklin is for sale again. If you are in the market for a single family, five bedroom, five bath historic home, you can call Donna Cox at Better Homes & Gardens, Rand Realty at 845-641-8613. To learn more visit handmansion.com