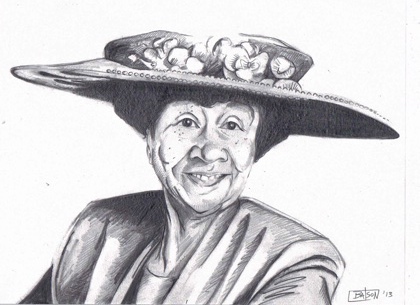 On Wednesday, December 16, 2020, Dr. Frances Pratt concluded her 41 year sprint as the President of the Nyack Branch of the NAACP. Dr. Pratt handed the relay baton to local civic leader Nicole Hines, trusting that she might keep the pace in the unending struggle for racial equity in America. The hand-off  reminds us of the longevity of this august civil rights organization, founded in Niagara, NY in 1909 and the tenacity of Frances Pratt, who arrived at the Port Authority Bus Terminal in New York City 64 years ago from rural South Carolina, wearing a borrowed dress and shoes too tight for walking.

Pratt grew up with her mother, four sisters and two brothers in rural South Carolina. An incident from her early childhood shaped her future activism. “I walked into an ice cream parlor with my mother and the clerk said, ‘You can buy the ice cream, but you have to eat outside.’ I had never seen my mother demeaned in that way.  If she had spoken up, the clerk would have called the police.”

In May, 1955, Frances, who was attending Friendship College in Rock Hill, South Carolina, learned that she would not be returning to school. “My mother sat me down and said ‘you are going to have to go to work for a while,’” Pratt recalled. “My brother Billy Powell and my mother were not well.” With the support of a teacher, Pratt found a potential employer in New York who would pay her $40 per month that she could send home to support the family. She first had to travel to Clover, South Carolina to pick peaches to raise the $17.50 for her bus fare.

Who is Nikki Hines?

Nicole “Nikki” Hines, recently ended her 16 year tenure at the Nyack Center, where she served as the Assistant Director to become the Director of Community Engagement and Social Change at The Center for Safety and Change. Prior to joining the staff at Nyack Center, Nikki attended the after school program and camp Nyack. She remains the  Coordinator of the Teen Council at the Nyack Center and Courageous Conversations on racial and gender justice with Nyack Public Schools. Nikki is also the chair of the Nyack Housing Authority. Nikki is  a founding Steering Committee member of the Rockland People’s Panel on Policing with Bill Batson, Nelcy Garcia, Hon. Michael Lockett, Rev. Evert Newton, Sherry McGill, and Father Owen Thompson. The group has organized an independent panel pursuing the mandate of Governor Cuomo’s June 12 Police Reinvention Executive Order. Nikki was the chaperone for the Nyack Center Teen Council when they organized a massive June 1, demonstration of over 1,500 to protest the murder of George Floyd.

Two years after arriving in New York City, Frances moved to South Nyack into the home of new husband Marshall Pratt. “I met Marshall in Mount Morris Park in Harlem while I was on a field trip with a group of children,” said Pratt. “I was working for a nursery school founded by Dr. Thelma Adair, the first women to serve as an elected Moderator for the Presbyterian Church.  Marshall declared that he wore out four tires circling the park trying to see me again. When he found me, we made a date.”

When Pratt came to Nyack, she dreamed of attending the missionary program at Nyack College. “I wanted to go to Addis Ababa in Africa.” But responsibilities to family required that she find a way to serve the world closer to home, so she enrolled in Rockland Community College where she obtained her degree in nursing. Pratt went on to work at Nyack Hospital for 53 years, holding titles including Head Nurse of the Emergency Room and the Office of Employee Health.

This week’s sketch is based on a photo that hangs in the emergency room lobby of Nyack Hospital. The lobby as well as a scholarship and a Peace Rose Garden were named in her honor when she retired.

With her typical combination of candor and comic timing, Pratt remarked at the dedication ceremony, “What I appreciate most about this recognition is that it is not about the late Frances Ethel Powell Pratt. I can actually read the plaque and smell the roses!”

In 1981, Pratt was elected President of the local branch of the NAACP. Pratt credits her husband Marshall, who passed away in 2002, for her memorable hats. “My husband designed all my hats.  He was a talented artist and would always design my hats and coordinate my outfits.” Pratt’s collection of 250 chapeaus were on display at RCC in 2005 for a fundraising event for the NAACP.

One of Pratt’s greatest legacies is the annual Dr. Martin Luther King Jr. program that has taken place at Pilgrim Baptist Church for the last 33 years. The interfaith, racially diverse event is consistently a standing room only affair.

When Frances Pratt first joined the Nyack NAACP almost 50 years ago, she served as the chair of the Religious Affairs Committee. Hines has asked Pratt to reprise that role, so that she can provide continuity in leadership. “What Frances Pratt has accomplished, in the face of the challenges that black women confront in our society, puts her in a class by herself,” Hines said.

Good luck to Nikki Hines as she takes up the good fight and starts her leg of the race. Surely, she will be greatly aided in keeping the faith by the continued support of Frances Pratt,

To join the Nyack Branch of the NAACP, click here.

Bill Batson is an activist, artist and writer who lives in Nyack, NY. “Nyack Sketch Log: Dr. Frances Pratt Steps Down, Nikki Hines Steps Up at Nyack NAACP” © 2020 Bill Batson. In Dec. 2014, Batson published “Nyack Sketch Log, An Artist and Writer Explores The History of A Hudson River Village.” Copies of the book can be purchased at billbatsonarts.com.