Could you give directions to Hezekiah Easter Park? If this question stumps you, it isn’t because you don’t know the park’s location, but because you are unaware of its rightful name.

A plaque at the parking lot entrance of the park, at the corner of Main and Cedar Street in Nyack, memorializes a veteran, rotarian, activist, and the first African American elected official in Rockland County, Hezekiah Easter, Jr. Some call the spot Veterans’s Park; others, the Main Street Gazebo. But since daily Black Lives Matter demonstrations have occurred there since the May 25th caught-on-video murder of George Floyd by Minneapolis police, protestors have rebranded this place Hezekiah Easter Park. 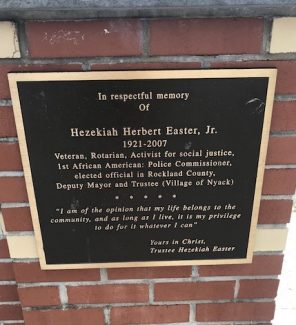 On Tuesday, July 28, from 5 – 7p, the public is invited to Hezekiah Easter Park to pay final respects to the late civil rights leader, Congressman John Lewis. Attendees who promise to honor Lewis by pledging to engage in activism and follow his example to “get into good trouble” will return home with a flower from the memorial to remind them of their commitment and have their picture taken with their pledge to be posted under the social media tag, #goodtrouble.

Who Was Hezekiah Easter? 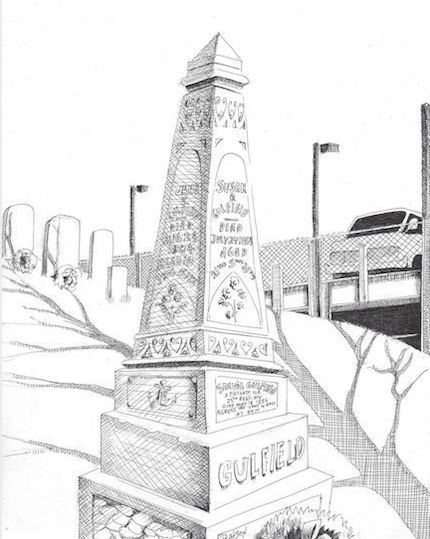 Cemeteries were segregated in America until the mid-20th century. Even Black veterans of America’s armed conflicts were dishonored when buried. Today, Mount Moor Cemetery stands as a monument to the twisted logic of racial discrimination. But the cemetery of approximately 90 veterans and civilians also serves as a symbol of perseverance and defiance. The gravestones at Mount Moor endure, despite the initial efforts of the developers of the Palisades Mall to obliterate the burial ground.

The exploits of men who fought and died to preserve a democracy that did not grant them citizenship is one of the greatest tales of self-sacrifice in American history. Hollywood attempted to tell the story in the 1989 film Glory, staring Denzel Washington. However, our monument to this expression of epic heroism, Mount Moor, would not exist if not for a hometown hero, the late Hezekiah Easter, Jr.

Hezekiah Easter, Jr. became the first African American person elected to public office in Rockland County when he won a seat on the Village of Nyack Board of Trustees in 1965. His connection to Mount Moor Cemetery was deeply personal. In 1945, he helped bury his brother Linwood, who died from a ruptured appendix at age 15. His father, Hezekiah Easter, Sr., a World War I veteran who owned a wood yard near the cemetery, was buried there in 1986. If the developers of the Palisades Mall had had their way, Hezekiah Easter, Sr. would have been the last burial at Mount Moor. 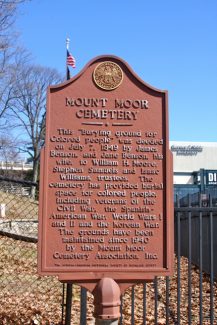 A copy of Mount Moor’s successful application for placement on the National Park Service’s Register of Historic Places documents how the cemetery was a significant landmark for a Black community that has called Rockland County home for over 300 years.

The recorded presence of African Americans in Rockland County began at the same time that Europeans arrived in the region. African slaves and free Black people were part of the Dutch community that settled here in 1687. According to census records from 1723, nearly 1/5 of the 1,244 inhabitants of the county were African slaves. Mount Moor was established in 1849, 22 years after the New York State Legislature abolished slavery in 1827 and 13 years before President Lincoln signed the Emancipation Proclamation in 1863.

The celebration will be held from 5:00 – 7:00 p in Nyack’s Hezekiah Easter Park at the corner of Main and Cedar Streets.

The public is invited to experience a multi-media memorial created by local artists Bill Batson and Kris Burns.

Attendees will be invited to honor Lewis by pledging to engage in activism and follow his example to “get into good trouble.”

Participants can take a home a flower from the memorial as a reminder of their commitment, and have their picture taken with their pledge to be posted to social media at #goodtrouble.

Speakers will include Nicole Hines, Assistant Director of the Nyack Center and Chair of the Nyack Housing Authority, and the Reverend Owen C Thompson, rector of Nyack’s Grace Episcopal church. Young people are especially welcome.

Lewis passed away on July 17 at the age of 80. Nyack’s memorial installation includes images and quotes drawn from Lewis’ life as a leader in events that shaped the history of the nation.

QR codes on the plaques will bring mobile phone users to sites that present the history of the civil rights movement.

Tickets are $12, and a limited number of comp tickets will be provided by the Teen Council of Nyack Center.

There will be a discussion on Zoom led by members of the Nyack Center Teen Council, moderated by Nicole Hines and Bill Batson, on Wednesday, August 12 at 7:00.

James and Jane Benson deeded the land that became Mount Moor Cemetery to William H. Moore, Stephen Samuels and Isaac Williams on July 7, 1849. The land was purchased for the purpose of creating of a non-denominational final resting place for black families that were excluded from cemeteries where whites were buried. The name of the cemetery captures the rugged topography of the location and the language of racial exclusion. The property is a wedge-shaped parcel on a steep hill and the term Moor was commonly used in the 18th and 19th century to described people of African descent.

The area around the cemetery had been, until recently, undesirable marsh land. So much private and commercial refuse was dumped nearby that the site was eventually dubbed Toxic Alley. Lacking the revenue and resources of traditional cemeteries, and with only a meager budget for maintenance, the grounds became overgrown. A lack of complete records and missing headstones have made determination of the exact population of the cemetery impossible.

In 1940, a group of leading African American Rocklanders established the Mount Moor Cemetery Association to maintain the burial ground. The first president was Rev. William Clyde Taylor, pastor of Pilgrim Baptist Church. Hezekiah Easter, Jr., who had been elected to the Rockland County Legislature in 1970, became president of the association in 1977.

Easter’s tenure as President of the Mount Moor Association coincided with the beginning of the battle against over-development chronicled in the documentary film Mega Mall.  A Syracuse, New York based developer, the Pyramid Companies, announced their plan to build the second largest shopping mall in America next door to the cemetery in 1985. Using his extensive experience in public office, Easter sought to secure local, state, and federal recognition of the historically important site. As a World War II vet, Easter helped coalesce support of his brothers-in-arms to protect and maintain the site. Veterans from every major American conflict are buried in Mount Moor including the Civil War, the Spanish American War, World War I and II, and the Korean War.

Even though the Pyramid Companies had amassed their own army of lawyers and public relations specialists to overcome community opposition to the mall, Easter did not relent. Joined by his colleagues Jacqueline L. Holland, Leonard Cooke, Wilbur Folkes, Charlene Dunbar, Bea Fountain, and their attorney Alicia Crowe, the group stood their ground, even when confronted by bulldozers and belligerent security guards.

“The families told me they did not want the Pyramid Companies to dig up their ancestors,” said Attorney Crowe. Proposals from the company included burying the plots under 100 feet of soil or disinterring the bodies for reburial elsewhere. “We were not going to allow them to disturb these rightful resting places in order to accommodate more parking spaces,” Crowe recalled.

At a meeting at Depew Manor in 1994, a representative of the Pyramid Company surrendered to the group’s demands. Once it was granted a place on the Federal Register, the cemetery could not be buried or dug up. The Pyramid company agreed to construct a fence around the original wedge-shaped survey lines from the 1849 deed, and also agreed to maintain the grounds of the cemetery.

There would also be a final tombstone.

On March 13, 2007, Hezekiah Easter, Jr. was laid to rest beside his brother and his father. The man who saved the cemetery is the last man buried at Mount Moor. A parking structure and the facades of box stores loom in the distance, held at bay by a solider and statesman who will forever keep his silent and solemn vigil over these hallowed grounds.

Special thanks to Brian Jennings, the Local History Librarian at New City Library.