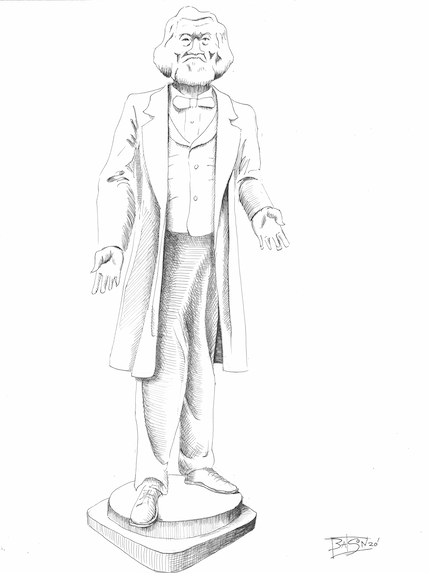 On July 5, 1852, Frederick Douglass, an escaped slave who would become one of the most powerful public figures in 19th century America, gave his most memorable speech in Rochester, New York, entitled “What to the Slave Is the Fourth of July?” On July 5, 2020, a statue of Frederick Douglass, 1 of 13 in that same city, was knocked off its pedestal and thrown near the Genesee River gorge.

No one has been arrested or taken responsibility for the act of vandalism, but the attack is seemingly in retaliation to the recent removal of 5 dozen or so monuments commemorating Confederate Civil War figures across the country. Not only did Douglass use words to dismantle American slavery, he actively recruited freed slaves to take up arms and defeat the Confederacy. Two of Douglass’ sons 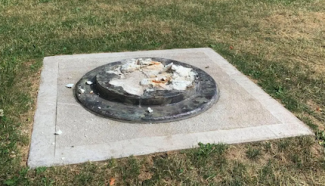 enlisted in the Union Army. If people sympathetic to the plight of Confederate monuments were looking for some symbolic payback, it would be hard to find a more suitable target than Douglass.

Does this volley of retaliatory monument destruction represent an escalation in America’s contemporary cold civil war?

Born a slave, Frederick Douglass’ exact date of birth was not recorded. It is estimated to be sometime during the month of February in the year 1818. When Douglass died on February 20, 1895, he was an internationally known social reformer, abolitionist, orator, writer, and statesman.

Douglass escaped slavery at the age of 20, embarking on a career that would substantially contribute to the abolition of slavery, conferring with President Abraham Lincoln along the way.

Here are some Douglass quotes that echo throughout American history:

Hear the descendants of Douglass read his Fourth of July Speech.

Historian David W. Bright publishes, Frederick Douglass: Prophet of Freedom, on what would be the 200th anniversary of his birth, winning the 2019 Pulitzer Prize for History.

In February, 2017, President Trump makes remarks that suggest he is unaware that Douglass has been dead for over a century.

As the COVID-19 pandemic spreads across our nation, uncontested by a federal response, the re-election campaign of Donald J. Trump has fixated on America’s racial divide as a means to hold and mobilize his base of support. By unintentional fault-line–or intentional design–the map of the Confederacy and Trump’s strongest electoral support overlap.

This could explain why it appears that Trump has chosen to champion the losing side of America’s Civil War in his televised and tweeted proclamations. The state of Mississippi and sport of NASCAR have abandoned the use of the Confederate flag in response to nationwide protests against systemic racism blatantly evident in the recent highly publicized murders of unarmed Black Americans. In a July 6 Tweet, Trump suggested that NASCAR will have lower ratings if they part company with the flag that celebrates secession. English philosopher Samuel Johnson observed that patriotism is in the refuge of scoundrels. Not only is our Scoundrel-in-Chief seeking refuge in the flag, the one he’s seeking refuge does not represent the country he leads.

Trump is by no means the first leader of an American political party to seek advantage in further dividing the nation by race. A group of Republican political activists called the Lincoln Project released a political ad on June 20 comparing the rhetoric of Donald Trump to segregationist presidential candidate George Wallace. The commercial was aired in condemnation of Trump’s choice to hold a rally in Tulsa, Oklahoma on June 19th. Tulsa is the site of a massacre of African Americans in June of 1921. And June 19 is Juneteenth, which commemorates the day Texas became the last state in the union to abolish slavery, in 1865. 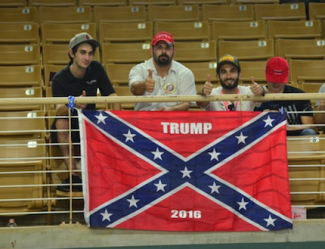 Trump’s segregation-friendly strategy was employed by Ronald Reagan, who chose Philadelphia, Mississippi to launch his 1980 Presidential campaign. Philadelphia is the town where the sheriff released civil rights workers James Chaney, Michael Schwerner, and Andrew Goodman into the hands of a lynch mob in 1964. To appreciate the extent that racial animus against African American endures, consider that to this day vandals continue to desecrate the tombstone of James Cheney. 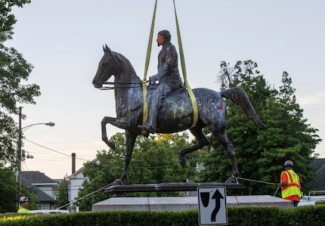 Continuing on his July 6th race-baiting bender, without evidence, Trump tweeted that the Douglass statue in Rochester was removed  by “anarchists.” Later that day, Donald Trump Jr. posted a photo of the empty base of the statue with this text: “REPUBLICAN FREDERICK DOUGLASS ESCAPED SLAVERY AND BECAME A LEADER IN THE ABOLITION MOVEMENT[.] DEMOCRATS JUST DESTROYED HIS MONUMENT… ON THE ANNIVERSARY OF HIS MOST FAMOUS SPEECH.” Note that neither called for an investigation to prove their unsubstantiated charge.

“The largest political meeting ever held in any public hall in Rockland County, was the Republican meeting held in the Opera House…The announcement a few days previous that Hon. Fred Douglass would be here on this occasion spread like wildfire through this county, and when the honorable, faithful exponent of true Republican principle stepped upon the platform, he beheld such a sea of faces as is not often seen in a village the size of ours.”

When Trump recently suggested that ANTIFA, autonomous groups affiliated by their militant anti-fascist organizing, be declared a terrorist organization, it became even clearer which side of history this political leader has chosen. It seemed that Trump had overlooked home-grown groups of extremists for law enforcement scrutiny. From its inception, the Klu Klux Klan has terrorized African Americans through murder and destruction of property. If you are looking to add groups to the Terrorism Watch List, the Klan, by self-definition, fits the bill. Perhaps Trump is reluctant to do so because former Klan Grand Wizard, David Duke, endorsed his candidacy in 2016.

America in the summer of 2020 is morally and physically sick, weakened, almost intentionally, by an incompetent Head of State who apparently sees benefit in letting coronavirus and racism spread like wildfire through the nation. Our civic immune system, however, is stronger. The crowds that publicly advocate–and occasionally over-enthusiastically facilitate–the removal of Confederate statues count their number by legions. Those who under cover of night topple monuments to universally embraced heroes like Douglass are few and shrinking.

I find some solace in one consequence of Trump choosing the Confederate side of our national divide. Being racist, and affiliating with the Confederacy, disqualifies a person from having a permanent effigy in modern America. And if by some twist of fate–or foreign interference–a Trump likeness is commemorated in marble and placed on a mantle in a public square, like the pro-slavery Confederacy, it will fall, taking its place on the trash heap of history.