Throughout a pandemic that shuttered the American economy and transformed the world, our first responders have continued to answer our calls. This week’s Sketch Log honors Rockland County’s 100% volunteer fire department. Empire Hook & Ladder Company Number 1 of Upper Nyack embodies that volunteer tradition of sacrifice and selflessness.

In addition to responding to emergencies, Empire has hosted the annual Halloween Haunted House and children’s Christmas party for over 30 years. These events are supported with the help of Empire’s two fund raising events, the annual Pig Roast and Christmas tree sale. Sadly, COVID forced the cancellation of this year’s roast.

With an indomitable spirit, Empire has recruited Nyack Sketch Log to offer a limited run of 100 signed prints of this week’s sketch of the iconic Upper Nyack firehouse. All of the proceeds from these sales will benefit Empire. Read more to learn about the firehouse’s storied past, meet Company President David Gottlieb, and find out how you can get a print and support these volunteer first responders.

David, how long have you been the company leader?

What brought you into firefighting?

My brother was a volunteer EMT. I don’t like blood, so he told me to join the firehouse. Best decision of my life!

My brother and I operate Goosetown Communications. We sell and service the communications systems for the police, fire, EMS, and businesses in the tristate area.

As more and more people move to our area, it is amazing to find out that most people don’t know that the Nyack Joint Fire District is 100% voluntary. It is a time commitment that, unfortunately, many of today’s 18-30 year-old people can’t make.

I hear you saved a historic truck featured in this photo of an ivy and bunting covered firehouse?

The truck went from Nyack to Cooperstown to the collector and back to Nyack. I bought that truck to celebrate our 150th Anniversary. Smokey Wanamaker and Homer Wanamaker were 16 year old kids who drove that truck during WWII. They were known as the “diaper brigade” since they left school to drive the truck because everyone else was fighting the war. Smokey and Homer both got to see the truck as a surprise before the parade and rode on the truck in the parade. Paul Wanamaker, Smokey’s son, drove them. 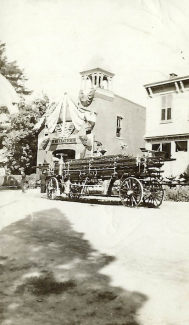 Any other firehouses like Empire’s in the country. What makes it so special?

We are on the National Register of Historic Landmarks. One of three firehouses that still have manual wound bells to alert members of calls.

Does the bell still chime?

How has firefighting changed since the company started?

The drive to make firefighting safer is what has changed the most since we started. In the “old days,” you would fight a fire with pull-up boots, a protective coat, and an air pack. Nowadays, we are equipped with full protective gear from head to toe, as well as thermal imaging cameras and communications that significantly enhance the safety of our jobs.

Could you explain the “Goosetown Against the World” slogan?

In 1909, the Nyack Fire Department accepted an invitation for the Hudson-Fulton parade committee and there was a disagreement about Empire marching in the parade. In the end, we wound up hosting other companies for food after the parade. When everyone was done and left the truck house, there were 6 companies, each with their own band, led by Empire and a jackass with a blanket that had the slogan “Goosetown Against The World.” The slogan remains as part of our company to this day.

There are three names memorialized on your building. Could you tell me something about them?

Welles Remy Crowther was an active member of Empire on 9/11/01 and was working in the World Trade Center for a financial company. When the planes struck the tower, Welles sprung to action and was credited with leading 18 survivors to safety. Tragically, he did not survive when the towers collapsed. People he rescued described him as the “Man in the Red Bandanna.”

His father, Jefferson Crowther, who was our past Captain and Treasurer, knew his son was the rescuer since both he and Wells always carried a red bandanna in their pocket. Jefferson passed at 73, on February 13, 2019.

Harry Wanamaker was a Lieutenant assigned to Marine 1 in the FDNY. Harry was a life member and past Captain of Empire, as well as working for the FDNY. On September 11th, Harry was working Marine 1 and stayed at the scene for over 16 days supplying water and fighting the fires. He spent countless hours working on rescue and recovery efforts in the years after this tragic event. Unfortunately, Harry was diagnosed with 9/11-related cancer in 2010 and passed away on July 20, 2010.

Joseph Stach, Jr. was also a Lieutenant in the FDNY assigned to Ladder 6 in Chinatown. Joe spent 72 hours at ground zero and spent a significant amount of time assisting in recovery efforts at the World Trade Center as well.

I understand that you had to cancel one of your major fundraising events. What’s another way people can support Empire?

This year, because of COVID-19, we canceled the Pig Roast for the first time ever.

The company has decided to sell the portrait that you made of our firehouse, Bill, as a way to replace the revenue lost from the Pig Roast. We will be selling 100 signed copies of your print for $60.00 each.

If you’d like to reserve a print, email David Gottlieb at DGottlieb@goosetown.com or Bill Batson at wrbatson@gmail.com.

You can also buy a print at the Nyack Farmer’s Market at the Main Street parking lot on Thursdays from 8a – 2p as long as supplies last.