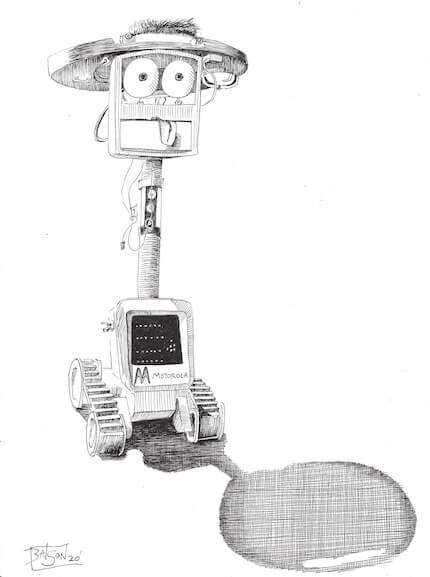 When the Nyack Mask Makers wanted an iconic local talent to serve as spokesperson, they reached into the hat, and pulled out a rabbit… that held the name Mario the Maker Magician, in its furry little paw! Mario is described by America’s most prominent magician, David Blaine, as the greatest kids magician in the world. As a maker, Mario has infused the digital into prestidigitation. 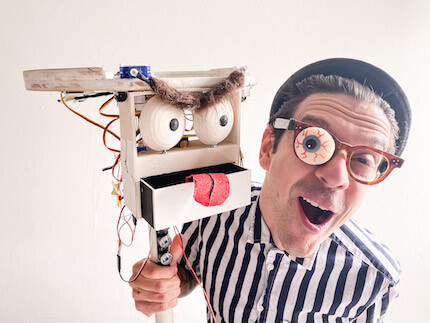 Learn how much magic there is in making and how much making there is in magic, and how he got to Sesame Street. Ladies and gentlemen, let me introduce Nyack’s marvel, Mario the Maker Magician.

What is your earliest memory of magic? 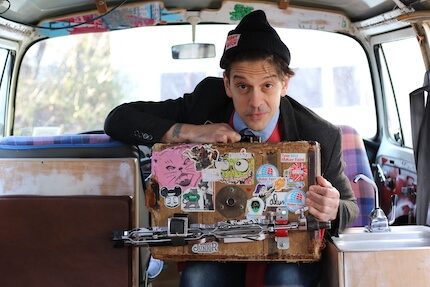 I walked into an antique shop one day, but unbeknownst to me, the antique shop had gone out of business and the location had reopened as a magic shop. As I entered the shop, my eyes were immediately drawn to an old TV set on the back wall, at that moment playing my favorite scene from my favorite movie: Robin Williams, playing Peter Pan in the movie Hook, sitting at a table with no food while a bunch of Lost Boys pretend to eat. Bewildered and frustrated, he picks up an empty wooden spoon and flings imaginary food across the table. At that moment–BOOM–a real dollop of what looks like sherbet ice cream splats right onto Rufio’s face. In shock, Peter is finally able to see that the whole table is filled with food. A feast of magnificent proportions awaits. For me, seeing that scene, at that moment, on that old TV in a shop I didn’t intend to enter, ended up being one of the most important days of my life. I bought a few magic tricks and ended up coming back every other day for the next year and half.

What is your earliest memory of making? 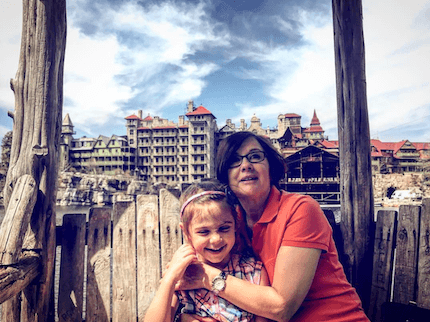 Some of my fondest childhood memories are of drawing with my mom when I was five or six years old. We used to have contests. She’d place an object on the kitchen table and see who could draw it the best. In my teen years, I started exploring anything and everything that sparked an interest. Carving wood, making puppets, floral design… I remember a hair cutting stage, too, butchering willing friends’ heads for a few months. HA! 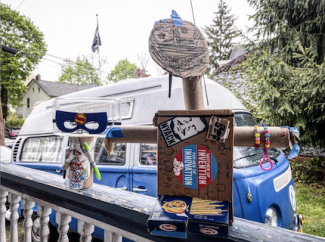 There is so much making involved with magic. What makes great magic is usually invisible to the spectator, all the secret moves and gimmicks hidden from the audience. But in reality, to me, sometimes the method of the magic trick is even more fascinating than the trick itself. There can be beautifully complicated mechanical mayhem just to make a single playing card seemingly float in mid air! And conversely, there is a lot of magic in making! I watch my son build cardboard “robots” that have no autonomous movement, but because he made it, it is able to fly between rooms, talk, and interact with the world.

What brought you to Nyack?

The short version, I attended Nyack College for a semester.  But I fell in love with the town, and stayed. I mean, I really fell in love with Nyack. This was 1997. Playing in pop punk bands. Hardcore Sundays at Knuckleheads. Skateboarding at the square. The people, the restaurants, the music, the coffee shops. Damn man, the people… the PEOPLE are what make a place alive. Those same people today keep me here. I left Nyack saying that if I ever get married, I wanted to come back here and raise a family. And here we are. 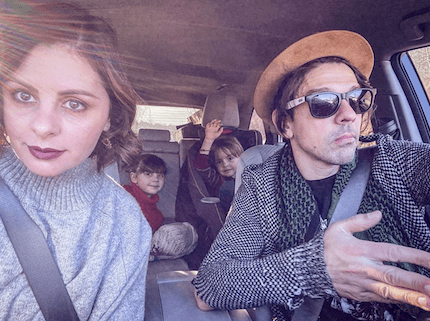 How did you and your wife meet?

How did you get to Sesame Street? 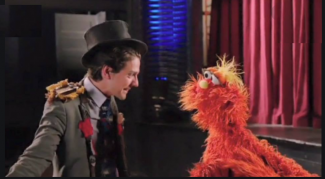 We were pushing so many private shows in the NYC area back then. Apparently, a couple of folks at Sesame Street had seen us at events, passed on our info, and when the idea of a magic episode came up, they sent me an email! I’ll forever be impacted by meeting the likes of Joey Mazzarino and Peter Linz that day. GIANTS in their field. What they do to inspire kids all over the world is so insanely inspiring!

Have you always toured in your VW bus? 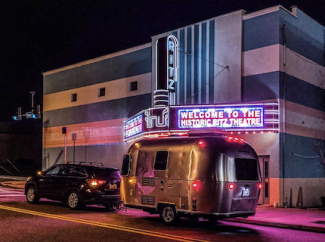 We toured in our 1971 VW, the “Little Blue Bus,” all the way to Boulder, Colorado and back a few years ago. It was the best, most memorable tour of our career to date! The breakdowns were all part of the adventure! But now, with busier tour schedules and more at stake, we have moved onto a more reliable modern tour vehicle, our newest baby: an Airstream travel trailer!

What is the allure of the road? 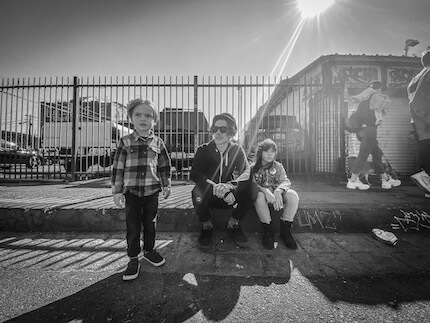 It’s about being free from everything. Not being tied to the traditional school schedule. Homeschooling our kids. Learning life skills along the way. Being able to do what we truly love, and getting paid to do it, is the greatest feeling. Traveling with a camper and not depending on hotels is liberating. “Home is where you park it!”

But traveling is also humbling. Being far from home teaches us so much. It can be scary at times. We drove through some heavy storms this winter… blizzards, detours, hundreds of miles of wilderness, unpaved roads. Man, even so… I miss it deep right now. This whole pandemic has really made me appreciate touring even more. 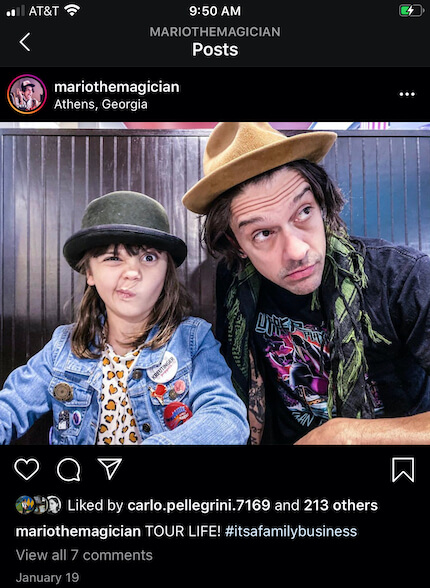 Why do kids need magic?

Magic starts when we are kids. By teaching a child a simple magic trick, you are giving them tools to overcome fear. Performing in front of people is such a great life skill. Someone said to me recently that magic is just undiscovered science. I feel that! Also, when I was young, my mom taught me a different kind of magic… about the importance in having faith. Hoping for things unseen. Believing in something invisible, eternal. These small seeds can sprout into great things as we get older. Ancient stories that teach us life lessons. I feel that so much, too!

Why do kids need making? 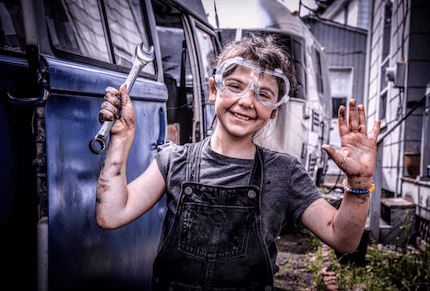 Making, aw man, how I love making. I talk about this in my live show a lot. When you make something, you understand something. And when you understand something, it gives you freedom. That’s all I live for! The earlier we teach our kids to use a sewing machine, to solder a circuit together, to 3D design, to fry an egg, to change the oil on a car, the sooner they will find what their own story is. Maybe that’s the answer. It’s important to make things, because by making things we find out who we are. 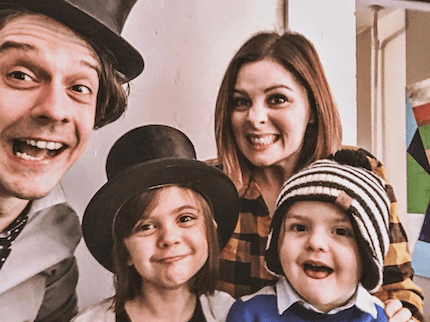 Any other makers and magicians in the family?

There are three other makers in our family! Gigi, our eight year old, knits, draws, sews doll clothes, makes jewelry, and is a constant example of resourcefulness, using what she finds to create what she desires. Our five year old, Bear, is a dancer, a robot maker, and a cardboard genius. He makes something new every single day. And Katie is the biggest maker in our family! She is a photographer, a video maker, a genius with branding and marketing, creating the image that the world sees of us online.

You appear in the Nyack Mask Makers video with one of your Arduino driven allies, Mr. Table. When was Mr. Table born? 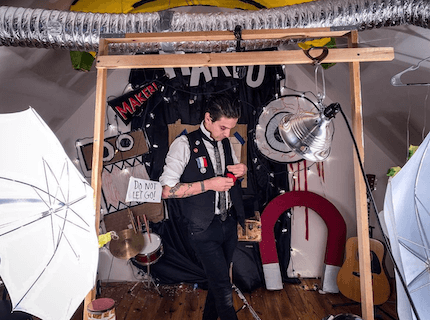 It’s funny, because there has only been one other time in my career that I’ve had to take a pause from live shows, and that was when I underwent surgery and rehabilitation for a badly broken hand. During that time, while everyone said the world was telling me to rest, I built Mr. Table. It was September, 2017.

He’s an autonomous, interactive and super expressive table sidekick! Ultimately, he didn’t make the cut as an addition to my theater show. But now, in this new season away from the stage, Mr. Table has found a recurring role in my virtual shows. In fact, several former projects that were retired from the show, or never made it in, are now finding new life in the virtual world! It’s been really fun to explore this new avenue and bring them back to life. 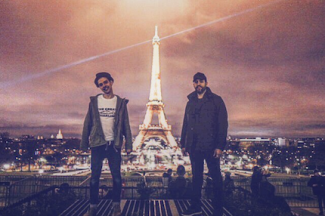 How did David Blaine come to call you as the “greatest kid’s magician in the world”?

It started when David hired me to do some private events with him. It was absolutely insane. He’s given me invaluable tips that have changed my performance. And what an AMAZING human, onstage and off. He has given so much to my family. I got to tour with him two years ago, opening his show, and that gave me an opportunity to find myself on a big stage. Without that experience, I’d never be where I am now as a performer.

I know that this pandemic has been particularly scary for your family. How is everyone?

We are well and healthy right now. Katie was pretty sick a few weeks back, but we are all fine now! 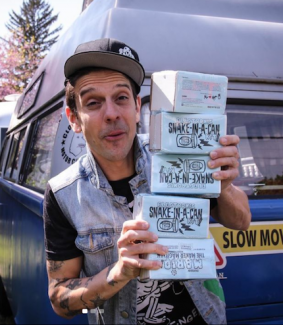 We hear you’ve developed a robot kit. Tell us more.

Yes!! We’re coming out with a DIY Electronic Snake-in-a-Can Kit early next month! Keep your eye on our social for more about that.

What was it like working with Nyack Mask Makers on the #masks4all project?

I am beyond honored to have been able to collaborate with an organization that I truly admire… Donna and you, Bill, and all of the mask makers… YOU are why Nyack is so special. YOU are the people who make Nyack what it is. THIS is the type of community we want our children to know. 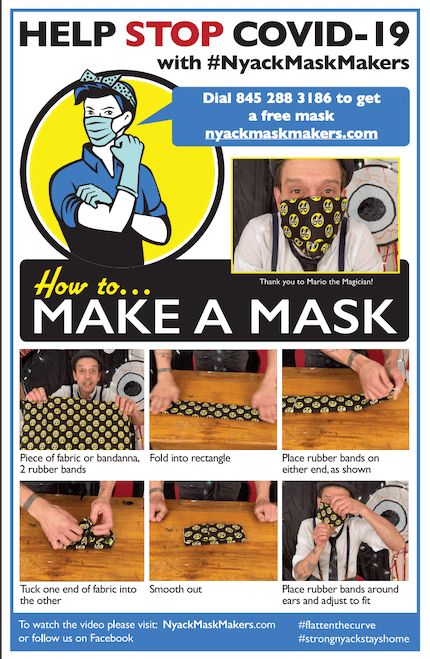 What’s next for Mario?

It’s hard to know when theater touring will resume. For now, we are continuing to work on virtual formats and live content collaborations. Creating videos and livestream experiences for partners like Make: Magazine has been a primary focus and a huge blessing to us during this time. We are continuing to do our best to stay connected to all of the amazing families and audiences that have been our lifeblood and supported us all of these years!!