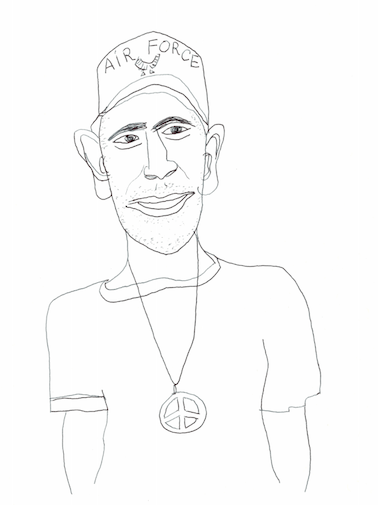 Although his death was not caused by COVID-19, the complications of our nation-wide shutdown contributed to the demise of Air Force veteran and artist Micheal Rogozik.

Michael was the kind of person that would’ve had a crowded memorial service, but again, the pandemic that has insinuated itself into every aspect of our lives, precluded such a gathering. In keeping with military tradition, however, his compatriots from the American Legion Hall made sure he received his military honors.

If you spent much time in Nyack over the last few decades, you know of Michael. He was on a first name basis with virtually everyone at our weekly, year-round farmers’ market as well countless other shopkeepers and residents. His warmth and gentlemanly manner drew you in. 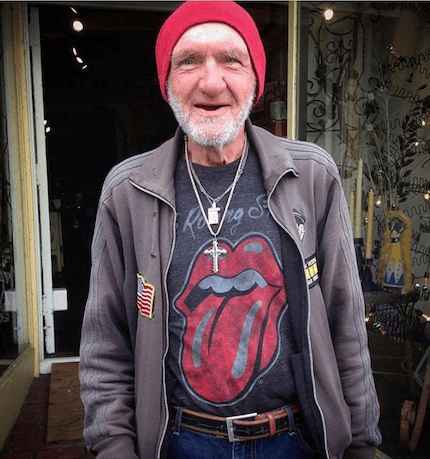 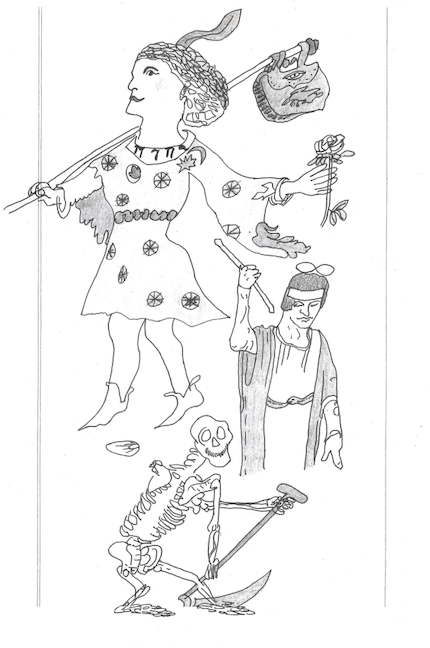 Mikaela Martin and Kris Burns have found a way to celebrate his life by sharing his unique insights as an artist. Nyack Sketch Log spoke to them about what he meant to them and to Nyack.

How did you meet Mike?

Mikaela Martin: I met Mike about seven years ago, at what was Sweetpea’s, on Main and Broadway. I overheard him talking to someone about his childhood in Australia, which is where I’m from. I eagerly interrupted, and am so glad I did! I had found an expat with so many nostalgic–almost romantic–memories of a small country town in the middle of my native “nowhere land.”

I would soon learn that all of Mike’s tales and memories had one thing in common: joy. He really was full of joy.

Kris Burns: Meeting Michael in the middle of your day was an invitation to meditate on eternal riddles of the universe–could you meet him halfway? Would you linger in the presence of the present? Michael was the gift of Main Street, the prize for walking downtown, for showing up, for remaining.

He was the daily encounter with the divine you forgot you were after. He gave us a glimpse into a pure heart and invited us to marvel in the tarot, Elvis, 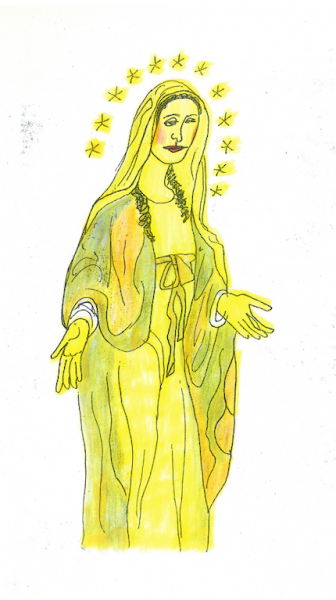 and Max Ehrmann; to consider what it would look like to live in a constant state of salutation; to be reliably kind, unwaveringly warm, and predictably unpredictable. There was even prophecy, if you could calm your cluttered mind long enough to recognize it.

How prolific was Mike as an artist?

MM: He didn’t stop. The difference between Mike and many artists is that he didn’t seem to have a self-critic. Even though he repeated many pieces, many times over, I don’t think it was because he was trying to perfect something. I think the repetition was a deepening of his love for what he was depicting and creating. The work was without judgement, and without ego. I think that’s evident too when you see it. Like him, it is full of joy.

KB: Several years ago, I had a store on Main Street called Festoon. Michael used to stop by regularly to say “hi,” show me his latest work, and then proceed to knock my socks off with some off-the-cuff bit of profound enlightenment before he sauntered out. I fell in love with his portraits of Lincoln, Elvis, and the Virgin Mary and asked if I could exhibit his work. One day he brought me two entire collections of drawings and we talked about the possibility of reproducing them as a book or cards. 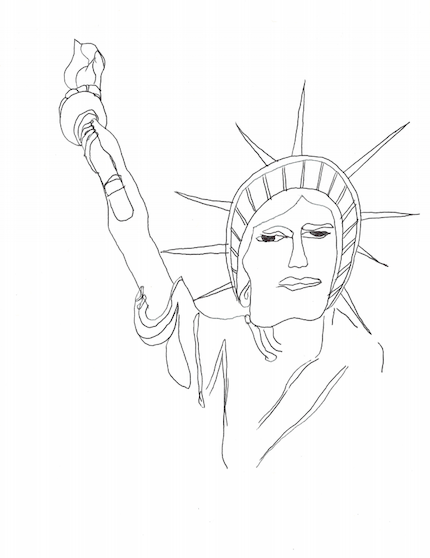 Regrettably, I closed the shop before I had the chance to exhibit or reproduce Michael’s work, and his wonderful collection got caught up in the shuffle of my best, but neglected, intentions. Little did I know that in a parallel universe, Mikaela was also talking to Michael about the possibility of exhibiting his work around the same time she was stopping in to buy flowers at Festoon!  Sigh…

How close was Mike with the local community of veterans? 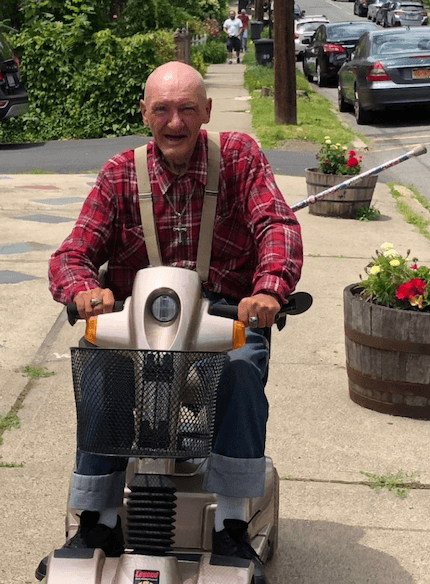 MM: Mike was a proud veteran, and a recipient of a Bronze Star. If members of the community didn’t know him personally, they certainly knew of‘ him. Just last September he attended the Nyack Legion 100th Anniversary Dinner. He was talking it up for months prior. The Nyack Legion had generously given Mike a scooter last year, and regularly checked in on him. Their generosity and care for Michael went beyond their sense of duty, and I know they had a genuine admiration and fondness for him. 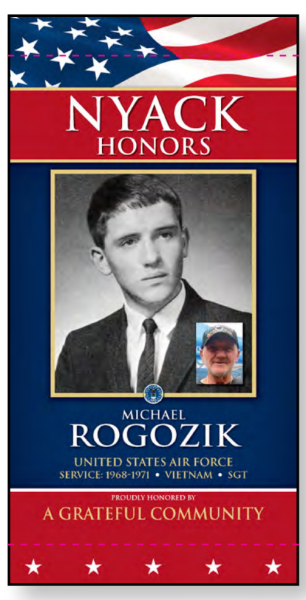 In a time when many restrictions have been placed on funeral services, members gave Mike an honorable farewell, with individual salutes and traditional TAPS.

What would you want people to know about Mike?

MM: Mike was a gentleman… not in the chivalrous or courteous sense of the word, but in that, he was a gentle man. He was a storyteller–and I don’t care if some of them weren’t true, I chose to believe them. He loved The Doors, The Rolling Stones, and I think more than anything, his Mother. In Mike’s home there is a room where he spent most of his time, and the pastel-painted walls are completely filled with his drawings, portraits of family, presidents, cards, iconography, military certificates–and on one wall, a small piece of paper with the letters Z E N. That was my friend: at peace with himself and the universe. Enlightened, and full of light.

KB: For one, the exchange with Michael required standing in place for an uncertain amount of time when you were certainly en route to someplace else.

It meant replacing the urgency you brought with you with the innocence you found.

It meant losing sight of where you were expected, and listening, really listening to a voice that was completely hypnotic and full of enlightenment. 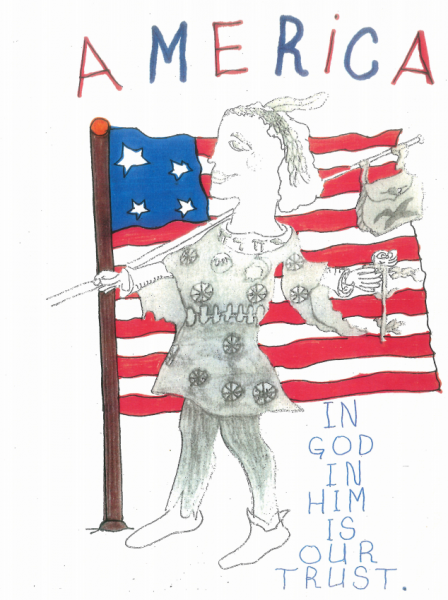 How Great Thou Art

Mikaela and Kris are organizing a series of prints, cards, tote bags, and possibly a puzzle emblazoned by Michael’s work. The collection will be called How Great Thou Art, and will be available soon at Main Street Beat at 95 Main Street. Proceeds from the sales will benefit Soup Angels and the Veterans Administration. The banner above that honors Micheal’s military service will soon hang in The Village of Nyack. To learn more about the life of Michael Rogozik, and to share your own recollections or pictures, please visit this facebook page