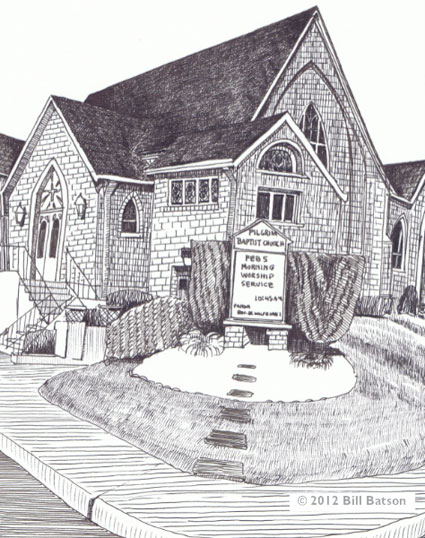 The much beloved and indelible pastor of Pilgrim Baptist Church, Rev. Dr. Willie L. Hairston, recently announced his retirement. A banquet in his honor, which also commemorates his 30th year in the pulpit, will be held on April 25th at the Nyack Seaport. 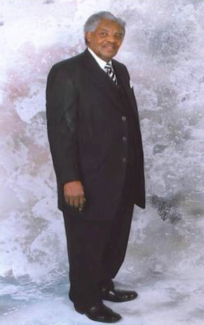 Tickets at $100 per person. payable to Pilgrim Baptist Church.

For information on obtaining an ad in the journal contact Mike Roy at
bromikeroypilgrimbaptist@gmail.com

Pilgrim Baptist Church has found a safe harbor at the corner of High Avenue and North Franklin Street for the last 59 years. The building has multiple slanted roofs and high arched windows that look like the peaks of cresting waves. The pulpit is on the north side of the nave facing south, under a series of massive wooden beams that shelter the pews as the hull does the precious cargo of a sturdy ship.  But the pulpit didn’t always face south and Pilgrim Baptist Church did not always rest at this spot. The spiritual voyage of this flock began in 1875 above a carriage shop on Burd Street.

Reverend Charles Mayo, Mr. & Mrs. Travis Armstead and Mrs. Kassie Whines were the souls that launched the first Pilgrim Baptist Church.   When the Armstead’s daughter Katie became the congregation’s first pianist, the sounds of wagon wheels being repaired and horses being re-shoed accompanied her musical selections.

By the time the spirit and size of the faithful outgrew their humble dwelling, the second floor above Spector’s Dry goods store on Main Street and Bridge was secured. Twenty-Eight years of patience and perseverance at this equally modest location was rewarded when a building at 187 Main Street was purchased in 1903 for $1,600 under the leadership of Rev. John Robinson.

Having their own building must have created a fertile environment for the growth of the church. In 1938, a mortgage-burning banquet was presided over by Rev. W.C Taylor. By 1955, before the parishioners could get comfortable, the Pilgrim family required a larger house of worship and the search began again.

On May 1, 1961 the Most Worshipful Prince Hall Grand Lodge of the State of New York laid a cornerstone for the congregation at a new church on North Franklin Street.  The dwindling attendance of a German Presbyterian parish provided Pilgrim this new sanctuary.  The chapel on Main Street was sold to Hollingswood Memorial Temple for $5,000.

After decades of temporary accommodations and transitions, Pilgrim had found a permanent home.  A program of reconstruction and renovation was undertaken to make sure that spatial limitations would not necessitate another move.  Some of those changes included changing the orientation of the pulpit from east to south and moving the entrance from Franklin Street to High Avenue.  In 1994 the church observed another mortgage burning celebration.  The sojourn was finally over: Pilgrim had its home.

A period of tranquility was further cemented by the arrival of a new pastor in 1990.  Rev. Dr. Willie L. Hairston first stepped into the pulpit at Pilgrim as a guest preacher from Mount Nebo Baptist Church in the Bronx, New York.  When the pulpit was later declared vacant, the membership of Pilgrim voted to make Rev. Hairston their leader. Rev. Hairston’s tenure has brought both dynamic programming and institutional stability to Pilgrim.

In a transcript of an oral history project at Nyack Library the late Hezekiah Easter, a prominent Pilgrim member, and Rockland County’s first African American elected official, described his childhood memories at Pilgrim. Easter recalled activities for young people that ran from early in the morning until night.  Today, Pilgrim continues to focus on the needs of its youngest members.  Children are supported in their spiritual education through Sunday school and choir, their academic development with scholarships and their professional aspirations with special services that encourage entrepreneurship.

Every January on the day that the Nations celebrates the life of Rev. Dr. Martin Luther King Jr, Pilgrim holds a service.  As the standing room only event, Rev. Hairston shared the pulpit with community leaders and local clergy including St. Philips AME Zion Church, and the Congregation Sons of Israel, presided over by Dr. Frances Pratt, president of the Nyack Branch of the NAACP.

African American churches have served as anchors for a community that has been buffeted by unpredictable and unforgiving political and economic forces.  Even when this congregation lacked a formal tabernacle, they continued to serve as an additional safe haven for generations of African American families in Nyack. This church building is a monument to the dedication and sacrifice of a small group of Baptists who gathered in prayer 137 years ago in a wooden clapboard walk up. They selected the perfect name for their congregation that would sojourn for almost 100 years before finding a spiritual home: Pilgrim.

Special thanks to Brian Jennings.

Photos courtesy of the Nyack Library