When the American economy could no longer benefit from African slavery, companies found a way to continue to use black bodies: manufactured minstrel mascots. From the 1880s through 1930s, derogatory images of blacks were casually used to sell everything from household wares and souvenirs. A panel discussion on Thursday, Jan 30 at 7pm at the Nyack Library will explore the hurtful practice of racist branding. 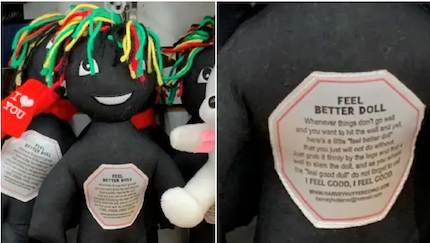 “Whenever things don’t go well and you want to hit the wall and yell, here’s a little ‘Feel Better Doll’ that you just will not do without. Just grab it firmly by the legs and find a wall to slam the doll and as you whack the ‘feel good doll’ do not forget to yell ‘I feel good. I feel good.'”

After wide spread outrage, the dolls were pulled from shelves, but the world, and African Americans in particular, were placed on notice. There are still companies who believe they can profit from trafficking in blatantly racist stereotypes, and stores that willing to sell them to the public. 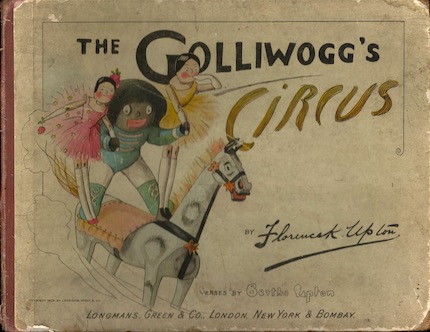 Most African Americans can recall the gut-punch feeling of seeing the first object that denigrates your identity. In 1990, while visiting England, I spotted a book in the home of the family that was hosting me. A minstrel stared back from the cover of a children’s book. I examined the copy of The Golliwogg Circus, published in 1903. Golliwogg is a doll, in black face, with exaggerate features and thick, unkempt black hair. When I told the family how offended I was by the material, they apologized and told me I could dispose of the book as I saw fit. But as offensive as these images are, the thought of throwing out the book never occurred to me. I knew that this book had to be included in the historical record. 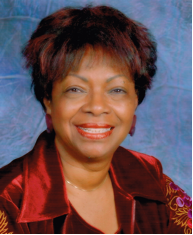 Nyack Library Trustee Dr. Cora Wilder has lived in South Nyack for over 55 years. In 2002, she retired from Rockland Community College, being the first African-American to achieve the rank of Dean of Arts and Sciences.

This panel is presented as part of Nyack Library’s Black American Culture & Art Series: The Legacy of Toni Morrison.

Examples of the racist origins of our nation, like the clause in the Constitution that apportioned votes by counting African Americans as three-fifths a person, must never be deleted. Every shred of documentary and physical evidence of how African have been treated in the Americas must be preserved. These fact can be used to educate the public, lest we forget and Feel Good Doll’s proliferate.

The panel on Black Memorabilia was inspired by the collection of Nyack Library Trustee Dr. Cora Wilder. Although Dr. Wilder can not participate in Thursday’s, panel discussion, much of her collection will be on display in the library later this year.

Nyack Sketch Log spoke with Dr. Wilder to learn more about her collection.

What inspired you to start and maintain your collection?

I didn’t start as a “collector.” I’m inclined to be more interested in items that reflect me, my culture, and who I am.

What was the first object you acquired?

I don’t recall the first item I acquired. It may have been the “Jolly N—-r” bank.

What is the most objectionable piece in your collection?

The most objectionable pieces in my collection are two postcards, each entitled “The Sleeping Beauty.”

One is the stereotypic Aunt Jemima and her mate.

“Sleeping Beauty” is sarcastic and demeaning. Also, household help were at the beck and call of everyone in the house. They worked from sun up to sun down.

In these postcards, both are asleep, invoking the notion (wide spread) of  being “lazy.” A deceased friend from Alabama told me this story. Her family were share croppers. They started work at 6am and everyday at noon a truck arrived with their lunch – warm cokes and saltine crackers. They had 15 minutes before returning to work. 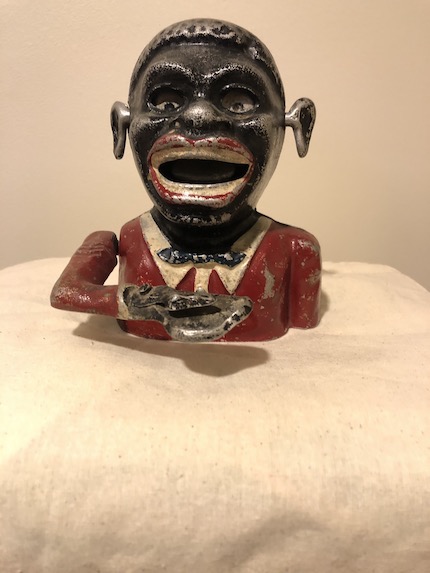 Where do you search for these objects?

I have purchased many of these items and some have been given to me. The Pygmy dancers (in all the obscene positions) was given to me by my mother-in-law; a neighbor from England had given them to her. Several pieces were purchased from antique dealers on Broadway, Nyack. One “Jolly N—-r” bank was purchased in upstate New York;  A second was purchased in Bath, England.

How many pieces have you collected?

My collection is small – maybe 100 items – including books.

Where would you like this collection to be placed, ultimately?

I would like the ultimate placement of these items to be decided by my daughters and granddaughters. The National Museum of African American History and Culture at the Smithsonian has amassed many items.

They can deal with this issue. I’d be happy to see them divide it among themselves. 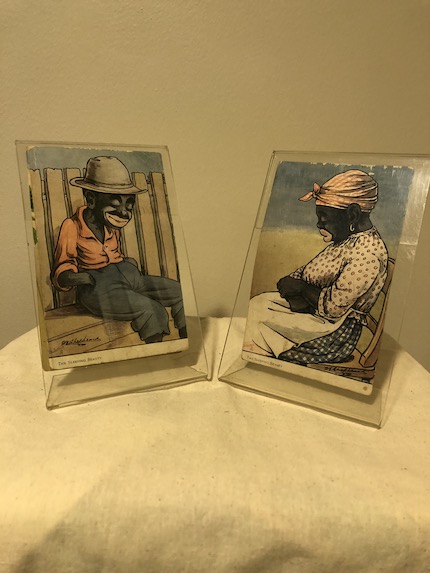 Did you ever encounter any of African American stereotyped objects as a child?

I don’t recall seeing any of this as a child. I am a Washingtonian (from age 6) by way of South Carolina. I realize now that our parents tried to shield us from overt forms of racism – ie, We never went to a movie house where Blacks sat in the balcony.

Have you seen other similar collections?

I have not seen a similar collection in the homes of either family or friends.

Do these images still disturb you?

Yes, these images still disturb me because they are so deeply ingrained in American culture.
They represent the truth about the African-American experience.
They are reminders, too, of both a painful history and great triumphs.

I truly believe that knowledge of our history and roots can provide the self-esteem and ego so necessary to becoming
a good person. 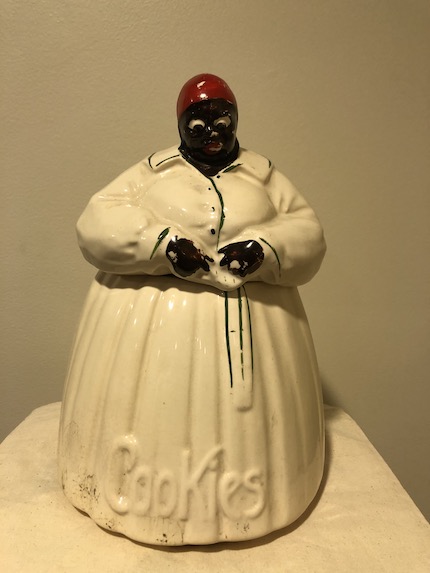 What are some of the most prominent America brands to use stereotyped imagery?

Did you hear about the Feel Better Doll? Are you surprised that stereotyped objects are still commercially available?

I’ve never heard of the Feel Better Doll? By no means am I surprised that stereotyped objects are still available commercially. Recently, I received such an item from Turkey advertising Rum. Making money seems to be the goal. 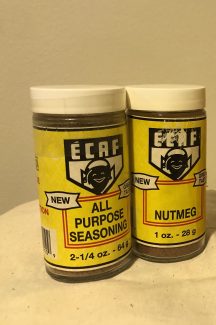 What do you think people should come away with when they look at these pieces?

I suppose people will come away with varying feelings – guilt, shock, anger, disbelief …

I would hope that many leave with the concern that the history of the USA is, in may respects, distorted and ugly.

This has never been “the land of the free and home of the brave, ” neither for Black people nor for many white people.

Special thanks to Tracy Dunstan, Head of Reference, Nyack Library