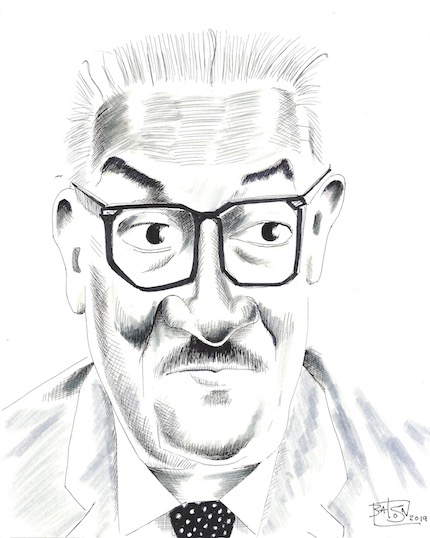 Before Thurgood Marshall helped dismantle discrimination in education by his successful argument in  Brown V. Board of Education of Topeka, Kansas, and literally changed the complexion of the Supreme Court by becoming the first black Justice, he came to Rockland County to argue a desegregation case.

I am excited to be teaching a course entitled “Thurgood Marshall Comes to Hillburn,” at the Learning Collaborative in New City that starts today.  In additions to covering research material collected for my column on the subject, I have speakers including Travis Jackson, who was one of the 49 children at the center of a successful desegregation case in Rockland County in 1943.

Like most public school students of color in mid-20th century America, Travis Jackson did not have a white classmate for a significant portion of his education. This demographic detail was not coincidental, but by design and accomplished with the pernicious misuse of public funds to maintain separate schools for black children.

In 1943, Brook School parents, led by Mrs. Marion Van Dunk, engaged the services from a young attorney with the National Association for the Advancement of Colored People’s Legal Defense Fund. When Thurgood Marshall came to Hillburn to defend the constitutional rights of elementary school students, Travis Jackson was entering the fourth grade.

Parents withheld their children from attending the Brook School in September of 1943 to protest the separate and unequal elementary school system. By October, their tactic and their legal counsel prevailed. The New York State Commissioner of Education closed the Brook School and ordered that all 49 children be admitted into the Hillburn School on Mountain Avenue.

Nyack resident and First Lady of the American Stage Helen Hayes was quoted at the time as having said: “I look forward with hope and prayer to developments in Hillburn…I am sure that the white people in Hillburn will have faith in democracy and…meet the situation with tolerance  and understanding. Their audience today is as wide as the world.”

In Hillburn, white families must have gotten a different memo. In the aftermath of the integration order, one parent told a reporter about a new committee that had been formed: “We’ll call it the Association for the Advancement of White People,” the parent said. “The Negroes have their association. We are forced to have ours.”

When a nine- year old Travis Jackson reported to school on the first day of integrated education in Hillburn, only one white student remained, briefly. Even though the desegregation of the school system was instituted during his fourth grade year, it was not until the seventh grade that the racial composition of the student body began to diversify. 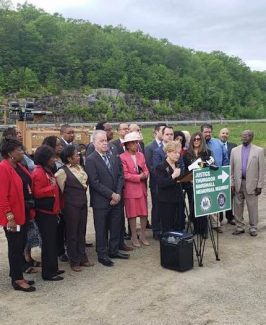 On May 17, 2019, Assemblymember Ellen Jaffee was joined by Rockland County Executive Ed Day, Senator David Carlucci and Assemblymember Kenneth Zebrowski to announce legislation (A-5939/S-521-A) to name a section of Rte.17 in Hillburn Justice Thurgood Marshall Memorial Highway. Enacted on June 24 with a pen stroke from Governor Andrew Cuomo, this distinction, bestowed on the first African American United States Supreme Court Justice, will represent the culmination of an enduring partnership between Jaffee and the Alpha Phi Alpha Fraternity to acknowledge the role that an overlooked case in Hillburn played in the shaping American history.

The event coincided with the 65 anniversary of the Brown v. Board of Education decision ending racial discrimination public schools, a case successfully argued by Marshall. “The foundations for the Brown decision are grounded in Marshall’s work as an attorney in Hillburn to end a local case of public school racial discrimination; those efforts began 11 years prior to the decision in Brown. Marshall’s efforts in Hillburn brought to a close more than a decade of school board intransigence in the assignment of elementary school age children to separate schools based only upon their race,” observed James K. Riley,  Adjunct Professor in Public Education Law in the graduate schools of Long Island University and Pace University.

“Two Schools for Hillburn,” a documentary by Joe Allen, chronicles how a plea from the father of one of the black students, a local Rockland County Attorney Jacob Wexler, brought a 35 year old NAACP Legal Defense Fund named Thurgood Marshall to Hillburn in 1943.

Along with Nyack Branch NAACP President Frances Pratt and Spring Valley NAACP President Willie Trotman, Dr. Travis Jackson, one of the 49 students who were represented by Marshall was in attendance.

Members of Alpha Phi Alpha, led by the late Dr. Willie Bryant have worked for years with Assemblymember Jaffee to bring attention to the historic significance of the Hillburn Case. Marshall was also a member of the fraternity. As a result of the research they conducted Jaffee was able to pass a resolution making May 17 Thurgood Marshall Day in New York State.  A monument in honor of Marshall, funded by the fraternity, was erected outside the Hillburn School in 2002.

“Thurgood Marshall showed us the way – that leads right down this Thurgood Marshall Memorial Highway and down so many other roads that he travelled which as individuals and a society we must follow, ” said Riley.

To avoid an association with students of a different race, white families sent their children to nearby parochial schools. But that strategy had its limitations. “I guess private schools eventually became too expensive, new families moved in and others saw that the world was not coming to an end,” Jackson said. Integration eventually took hold. When Jackson graduated from Suffern High in 1952, six of the 83 students in his graduating class were black Brook School alumni. Jackson went on to obtain his Doctorate in Education and serve as an educator and administrator for over three decades in schools in Suffern and northern New Jersey.

In 1954, Marshall and his colleagues at the NAACP Legal Defense Fund successfully argued Brown, ending segregated public schools in America. The reaction in some communities was similar to the initial response in Hillburn. One of the most dramatic examples of resistance was in Arkansas, where President Dwight Eisenhower had to send in the National Guard to ensure the safety of black students during the process of integrating Little Rock High School.

Supreme Court decisions, like Brown, had a profound impact on America by ending state-sanctioned discrimination. Decisions by the current high court, in areas from voting rights to affirmative action, signal the removal of the legal remedies that were enacted to address a legacy of racial discrimination in our country. Recent comments by onetime Tea Party darling Cliven Bundy and Los Angeles Clipper’s  former owner Donald Sterling suggest that many of the same racial antagonisms that were prevalent before Brown endure.

But for those who may feel dispirited by recent racial discord, near and far, Jackson’s description of Hillburn after public school integration is reassuring.  According to Jackson, the resentments of the adults of that period did not trickle down to their children. “Many of my friends, who are white and grew up in Hillburn, never got why they were dragged out of their school in 1943. Today Hillburn is one of the most integrated areas of Rockland – integrated economically, politically, and socially. It is also a nice place to live,” Jackson added.

Statement from Assemblymember Ellen Jaffee on the passing of Dr. Bryant.

“Dr. Willie Bryant’s life was defined by public service and community activism. Over the years I had the distinct pleasure of partnering with Dr. Bryant, his brothers of Alpha Phi Alpha fraternity, members of the NAACP and other community leaders, in his outspoken efforts to commemorate with a monument the distinguished career of the late Supreme Court Justice Thurgood Marshall, the significance of the Hillburn School and the civil rights movement, a watershed period in American history. I am honored and humbled to have worked so closely with Dr. Bryant and proud of our successes in having the Hillburn School listed on both the State and the National Register of Historic Places and to have sponsored legislation designating May 17th as Thurgood Marshall Day in New York State. Our community has lost a pioneer and a driving force in the fight to provide an equal, quality education for all children. Dr. Bryant’s extraordinary vision, dedication and leadership will be sorely missed.”