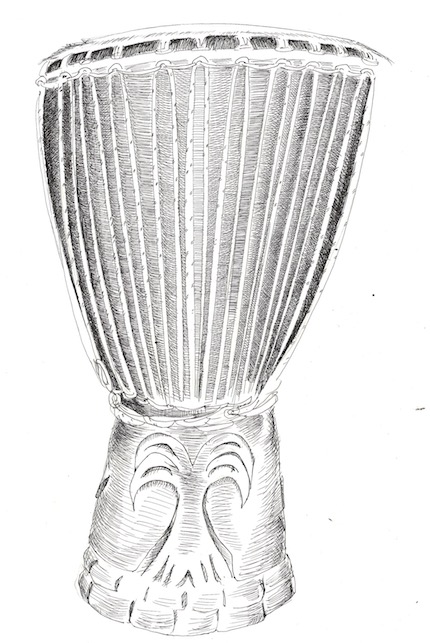 Every second Friday of the month, sound waves unleashed from a back room at Casa del Sol bounce off buildings, creating a samba-line sensation that move your feet toward the vibrations.

Inside, animated by a digitally syncopated light show, participants are both rythym section and spectator. The music and movements are choreographed through the call and response style vocals of Glenn Schloss, the creator of For Vibration, a popular activity that equally enthralls adults and children, fusing percussion, electronics and soul into a post modern drum circle

As co-founder of Flavorlab, a sought after New York City music and sound design facility, Glenn has composed countless soundtracks for NBC, A&E, PBS, VH1, ESPN and HBO Films, including the theme song for ABC’s The View. Here’s an invitation to attend the next for vibration event, this Friday, July 12th at Casa at 104 Main Street and an opportunity to learn more about our Glenn and his groove. 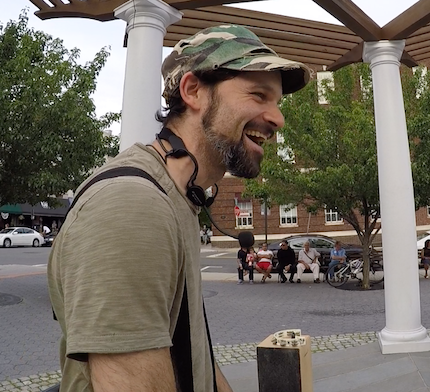 Is it true that all you want to do is bang on a drum all day?

100%. I just love rhythm and how it makes me feel in my body when I’m playing. I feel free and unstoppable.

When did you start banging the drum?

I think I was 7 years old when the rhythm really hit me. I remember hearing Honkey Tonk Woman on the radio and being completely mesmerized by the cowbell and the Charlie Watt’s drum intro. It all felt larger than life. As far as actually jamming? My first experience was playing pots and pans with my older sister’s high school band in our living room.  It was such a great introduction into the world of music. 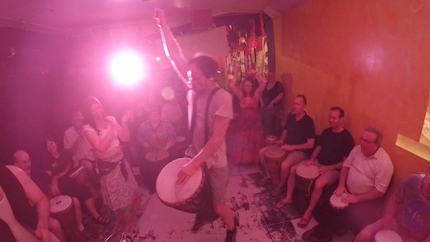 How did Drink and Drum start?

In 2012, I started creating what I called, “rhythm journeys” for my wife, Elena in our living room. I combined ambient soundscapes, percussive drumming and sound bytes from philosophers and thought leaders, while Elena chilled on the couch and listened.  It really felt hypnotic for both of us. Almost like a brain massage. 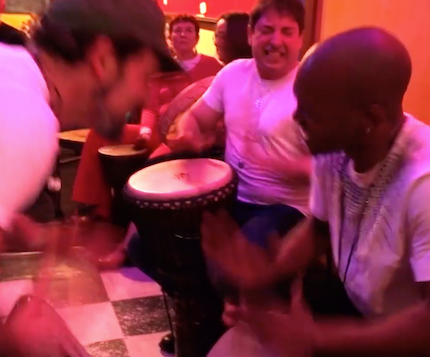 At some point, I decided to invite six of our closest friends to experience this drumming/sonic meditation while encouraging them to drum along as well. Thus the drum circle was born. The rule was, if you enjoyed what we were doing, our six friends would each have to invite another couple the following week. Pretty soon, we were hosting drum gatherings in our living room every Sunday morning.

If you love to drum or just want to dance to some tribal beats, then Nyack’s Drink and Drum drumming circle is for you.

You don’t have to be a drummer to take part….. All you need is passion, a free spirit, and love for music.

A small hand drum will do.

Most people like to bring African djembes because of their volume and sound…. but you’ll also see bongos, congas, tambourines, cajons, doumbeks, tarbukas, snares, sticks, and anything else that makes a sound.

This event does not judge or discriminate….so bring any kind of drum that you can find, and check your ego at the door. You’ll leave with sore hands and a rejuvenated spirit.

The drumming circle is free and starts at 7pm.

From Wright In Nyack, a blog post from 2/9/18 by Wright Bros Reality

We quickly outgrew our space and took the circle to Memorial Park where I built up a following of dedicated drummers and dancers. It was a magical, adventurous and experimental time for all of us. I remember being out in the freezing cold with the wind beating off the Hudson River and we would play all morning and afternoon.  Then as the circle started to grow even more in the park, the police showed up and shut us down because I didn’t have an official permit. Luckily, a few weeks later, I was invited to play with the Nyack Art Collective on their First Friday in the gazebo on Main Street. It was an amazing feeling, playing in the middle of town with a real permit! It felt like finally, no one could stop us, until it started to down pour! That’s when the owner of Casa Del Sol waved us in across the street to finish our set inside. He fed us, gave us beers and we never left! It’s been 6 beautiful years playing at Casa Del Sol every 2nd Friday of the month.

Why are you For Vibration? 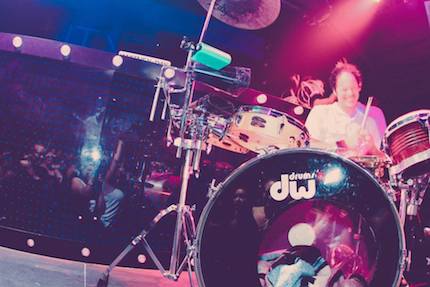 I was always drawn to the word vibration and the meaning behind it. Each and every one of us is made up of vibration. How we resonate, how we communicate, how we move our bodies, how we think, and how we speak is all based on the concept of vibration. I think the drum circle is a big, colorful manifestation of that concept. My old mantra was…awaken your mind, body, spirit and groove – the four vibrations. Then I realized it was something much bigger than that. More than four vibrations, it was for all of the vibrations that make us truly who we are. It’s For Vibration. 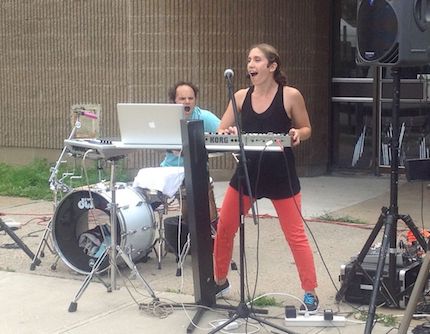 Don’t you have a family band?

We’ve had a couple of family bands in the past. My wife Elena and I created a kids band called, The Hiccups! We got inspired when we started having kids, so we played a ton of events and parties and it was such good fun. I also have a band called, Schlango Doss with my brother, Danny and my dear budd, EdP.  I  would say, my family jams as much as possible in the house on a daily basis. All of our instruments are scattered around the house so it’s easy to just pick up and start playing guitar, drums, bass, mandolin.   Connecting with my kids through music means the absolute world to me.  It is the most connected I feel to my kids when we’re playing and locked in a groove. 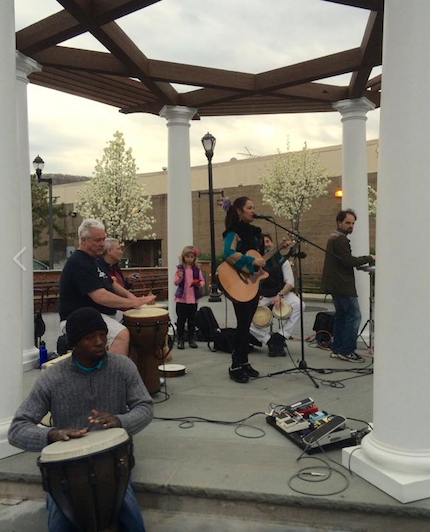 When did you sit in your first drum circle?

The circles in my living room were where it all began for me.

Describe some of the tech you use?

I’m a big fan of fusing acoustic and electronic instruments when I’m on stage. From a live perspective, I have a Mac laptop running Ableton Live which allows me to play and mix tracks over the course of my set.  I have an XP-30 Roland keyboard with some cool pads and fender rhode-type sounds as well as two Roland Hand Sonic HP-15 pads which allows me to drum with my right hand and play melodies with my left hand on either side of the keyboard. It’s fun having two sets of pads on stage as it really gives me a crazy amount of options. 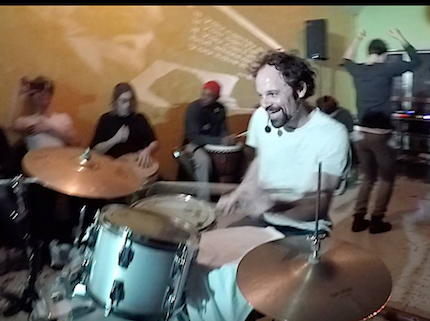 I also have a kick drum trigger on the floor set up. A lot of folks think the drum circle is playing to pre-recorded loops, but we’re actually playing everything live against my kick drum trigger. It allows the drum circle to weave in and out of different tempos and yet it feels like a solid sampled foundation with the foot pedal, which is so cool and fun to play with. I also have a wireless vocal microphone with interesting EQ and reverb settings, so I can jump in and out of the circle and I’m not constrained to a hand held microphone.  One of my favorite things to do is run around the circle, do back-flips and get people moving. 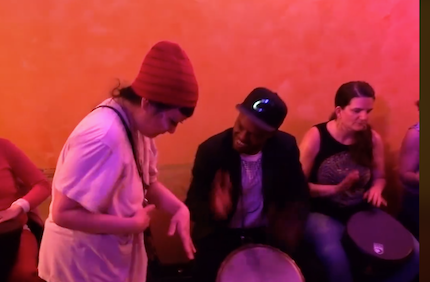 Tough question! I would say every drum circle is so rich with nuance. It could be a certain dancer in the middle of the wave or a certain drum moment where everyone is peaking and playing as the OM waves are hitting us from the speakers. It’s really tough to say though as a guest and passenger, my favorite drum circle was up at Peace through Play with Allan Berger’s group. It was an unforgettable moment that just clicked for me one night. Watching all of these people play in perfect unison without any preparation. Then the dancing started and it was just absolutely hypnotic, a tour de force. I wanted to take that energy and that experience as a guest that night and bring it back home with me to Nyack and then do my best to add my own spin.  I have such reference and respect for what Alan Berger‘s doing with Peace through Play.

Tell me about some of the drummers? 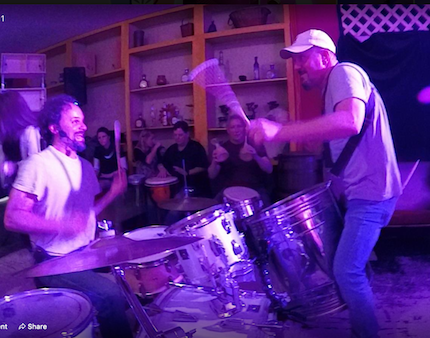 The drummers that come to Casa Del Sol are some of the most eclectic, awesome, colorful individuals you will ever want to meet and play with.

To get a flavor for my crew, I suggest checking out A Drink and Drum Story, on our website, forvibrations.com and Facebook. My wife Elena started a video diary highlighting some of their stories and why they come to play.

What other ends of the music biz do you find yourself? 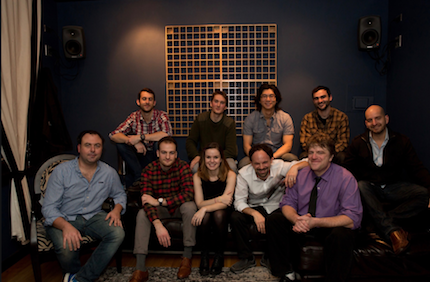 My partner Erik and I got a lucky music break in ’97 composing music for a TV show on VH1. From the success of that show, we created several audio companies and we currently co-own Flavorlab, along with our third partner Brian Quill. The three of us have been partners for over twenty years and we’ve been making some beautiful music and mix for television and film. I’m really proud of what we’ve all created together. 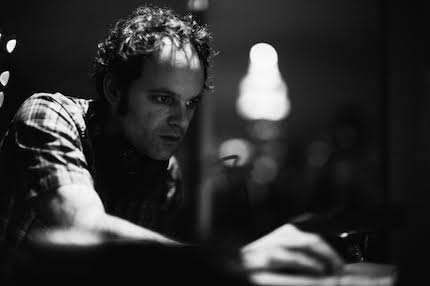 A nicely tuned 10″ rack tom with a coated emperor on top and a remo ambassador on the bottom of the head. It’s such a beautiful, resonant sounding drum.  I can listen to that tone over and over again.

Another tough question Bill! There are so many greats. Some of my all time favorites are Iron Maiden, New Order, Tears for Fears, Earth Wind and Fire and China Crisis. From an artist perspective, I’m in love with Jeff Buckley, Jimmy Hendrix, Stevie Wonder, John Coltrane, just to name a few. 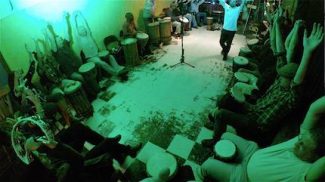 Anything played by John Bonham

Keep on sharing my love for rhythm with the world.  Continue to motivate and inspire people to want pick up a drum and learn how to express themselves. It is such an incredible, empowering feeling to play a hand drum and the great news is, everyone can do it.

for more information visit forvibrations.com or on Facebook here.