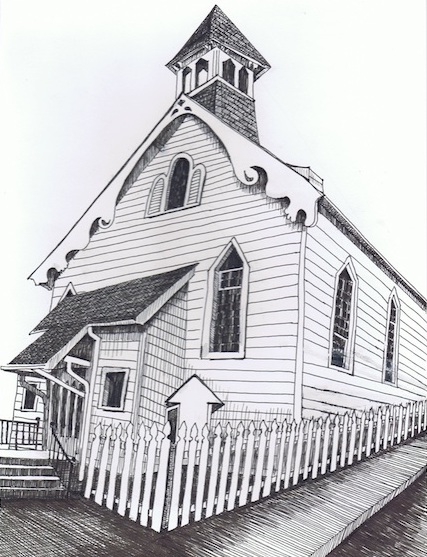 This year, St. Philip’s A.M.E Zion Church on the corner of North Mill and Burd Streets celebrates 160 years of worship. The church was founded in 1859, two years before Abraham Lincoln was sworn in as president, by abolitionist John W Towt. In the 1850’s, as slave catchers roamed the north empowered by the loathsome Fugitive Slave Act, abolitionists faced legal jeopardy and mortal danger. It was under the gathering and ominous clouds of a civil war over race based slavery that Towt arrived in Nyack determined to contribute to the welfare of the black community.

In 1821, the 19 year old white Methodist was exposed to the cruel perversion of slavery while traveling through the south. Towt settled in Nyack in 1859 after a successful career in New York City where he amassed a fortune.  He immediately threw himself into the effort to ensure that there was a Sunday school for black children in the village. At the same time he made arrangements to secure property for a church building and accommodations for a minister.

It is not surprising that the church that Towt would help establish was of the African Methodist Episcopal Zion denomination. The A.M.E. Zion Church was founded in New York in 1796.  From its inception the church was an active participant in the Underground Railroad and counted Harriet Tubman, Frederick Douglass, and Sojourner Truth as members.

Although Towt played many roles in the congregation including superintendent of the Sunday School, the day to day operation and religious activities of the church were led by members and pastors of African decent. The enduring wooden edifice at the corner of Burd and North Mill Street is evidence of the prudence and probity of the congregation.

At a meeting in early 1886, the chairman of the building committee, William H. Myers, argued against repairing the church and asked all those in favor of building a new church to stand. The whole congregation rose to his challenge.  My great grandfather, George T. Avery, was one of those who stood up.  As the Chairman of the Board of Trustees, he contributed $36 towards the $2,311 that was eventually raised.  The building that was dedicated on Sunday December 17th 1886 was of such solid design and durable material that it still stands.

Mr. Towt made his last public appearance in the pulpit of St. Philip’s on September 11, 1887. He was said to have been pleased with the results of his 28 years of collaboration with Nyack’s black community. He told those assembled that as its founder, he felt doubly repaid by the fact that his efforts had not been in vain.

In his definitive examination of local race relation, Nyack in Black and White, Carl Nordstrom cites a 1959 St. Philip’s Centennial Souvenir Journal as a source of some of his research. I was fortunate enough to recently obtain a copy from current St. Philip’s congregant Hazel Lancaster. Her husband, Earl, was the chair of the centennial committee.

Within the pages I counted four generations of my family.  There was an historical photo of my Great Grandfather, George T. Avery; his daughter, Frances Lillian Avery Batson, who was a Secretary of the Trustee Board: my Aunt, the former Deputy Clerk for the Village of Nyack, Frances Adeline Batson photographed during a Sunday school class that she taught, with her daughter, my cousin Sylvia Peterson, sitting on her lap.

The pulpit of St. Philip’s seems to attract ministers that John Towt would admire: individuals dedicated to the advancement of the black community and drawn from the A.M.E Zion tradition.  The first pastor that I remember from my childhood was Rev. Petty D. McKinney who led the church from 1962 until 1968.  McKinney’s first year in Nyack was interrupted by return trips to Florida where he had to face unlawful assembly charges from his participation in the Freedom Ride movement.

Few buildings celebrate 160 anniversaries; even fewer organizations reach such an august milestone. The spirit of those who endured slavery and those who risked their life, freedom and property to abolish the barbaric institution survive through the longevity of St. Philip’s A.M.E Zion Church. Like an eternal flame, the ideas of freedom and self-determination that John W. Towt enshrined in this humble wooden building have been diligently tended by generations of members of the St. Philip’s family. May they never be extinguished.