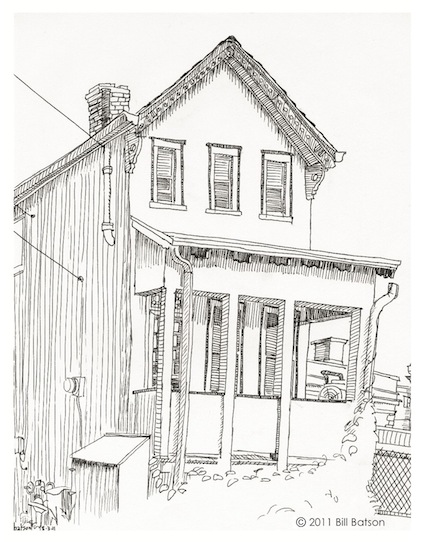 On the occasion of the publication of Nyack Sketch Log, Volume 2, here is the first Nyack Sketch Log. I had spent a few weeks during the summer of 2011 sitting around the village, filing the pages of my sketch pad. NyackNewsAndViews publisher Dave Zornow saw me working around town and asked if I would submit a drawing with a caption. Twelve hundred words and one sketch later, the Nyack Sketch log was born. Even though Dave was concerned I did not know the meaning of the word “caption,” he offered me a weekly column.

My first essay was more about the absence of a place than what was in front of me as I sat on the curb at the corner of Liberty Street and Depew Avenue. I was mourning the loss of a middle-class African American neighborhood, where my grand mother had once owned a home. The house that I chose to draw is similar to ones demolished by fiat through the use of eminent domain during Nyack’s Urban Renewal period.

Here’s the essay and drawing that launched hundreds more. Information about how to buy Nyack Sketch Log, Volume 2 is at the bottom of this column.

This house and this street are the remnants of Nyack’s oldest middle-class black neighborhood.  In the early twentieth century, when Edward Hopper was a teenager, a group of African American families bought homes in Nyack. Homeownership by blacks in Nyack was a stunning achievement when you consider the fact that merely fifty years earlier blacks owned nothing: blacks were owned.

The speed of this reversal in fortune is hard to comprehend. In historic terms, fifty years is a tiny interval. Fifty years ago was 1968. Imagine a family advancing from slavery to home ownership in the time span that America went from black and white TV to digital cable. My 60’s reference is purposeful irony. It was urban renewal; a phenomenon of that era that destroyed the middle-class black community that many refer to as Jackson Avenue. Almost obliterated, that is, except for this house on Liberty Street.

My great grandparents purchased the house on Jackson Avenue.My grandmother used the meager sum that she got through the condemnation process of the eminent domain debacle to buy another home. The only saving grace is that this site now holds much needed affordable housing and a senior citizen development.

As I sat on the ground in front of this modest structure and drew, a parking enforcement officer walked toward me. I asked him if he was going to ticket me for squatting in a parking space. He laughed and said if that was the case, he would have written me up weeks ago; having seen me numerous times perched on the curb side drawing. I think he chose this moment to say hello because he approved of my subject matter. It turns out that he knew my aunt, who was once the Deputy Village Clerk and who grew up on Jackson Avenue.

I was then approached by a local artist who told me she admires, but avoids representational drawings. She is an abstract painter, which I told her I envy. She lamented the demands of linear perspective, telling me how she would throw in the towel after the first line went astray.  Watching my imprecise and quivering depiction, she thought aloud that if she could have forgiven herself  the occasional errant mark, she would have seen that the whole is greater than the sum of its imperfect parts.

Because I draw free hand with black ink on white paper, I confront the fear of failure with every pen stroke. Yet I persist and complete each drawing, motivated by my attachment to the village and enriched by my random interactions with the villagers. That someone who loves Nyack and making art would consider drawing from life after meeting me on this special site was invigorating. During this encounter, I could feel the freedom that my ancestors must have felt on this spot. As modest as this home appears, its very existence and hidden history is profound and I am pleased to have archived it.

The cartographers got this one right. Liberty Street is aptly named.