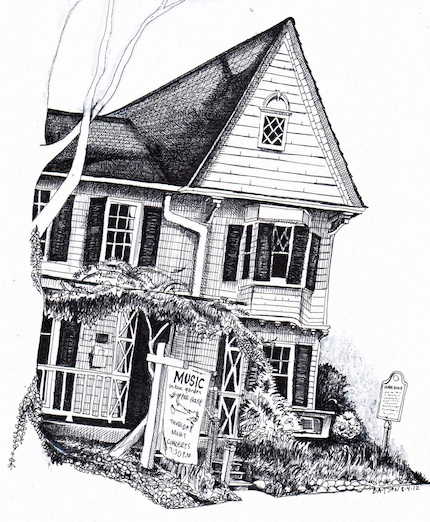 Art lovers travel to Nyack from around the world to experience the childhood home of the preeminent realist painter, Edward Hopper. Daytime visitors enjoy exhibitions of contemporary artists and Hopper family artifacts, but for neighbors who come at night, there is a special sensory treat.  For those who arrive with a blanket or chair on designated Thursdays and Fridays in July and August, a feast of jazz music and cinema is served in the backyard.

Ray Wright came up with the idea for the Jazz Music in the Garden series when he was a Hopper House director in 1981.  Once he gained the support of his fellow board members he reached out to then Nyack High School Music Teacher Bert Hughes to be musical director, a role that Hughes plays until this day. “I sent personal letters to all the surrounding neighbors to win their approval for the outdoor evening concert series,” Wright remembered.  In its 37th year, the series attracts some of the greatest jazz performers and a loyal audience 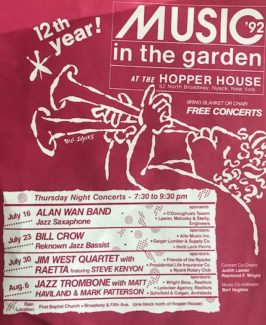 This year Jazz Music in the Garden presents:

The first movie that multimedia artist Kris Burns projected on a building in Nyack was Charade in 2002. That screening helped form Rivertown Film Society, a nonprofit that celebrates the art of the motion picture through film screenings and educational programs.

In 2011, as artist-in-residence for the Hopper House, Burns organized a series of pop-up projections commemorating the 40th anniversary of the arts center. People walking through the village would stumble upon cropped figures from Hopper paintings projected on bricked over door ways and windows. A showing of Hitchcock’s Psycho transformed the side of the Verizon building, which stands adjacent to the municipal parking lot, into a drive-in movie screen. “Hitchcock was inspired by Hopper’s painting of a physical space, House by the Railroad, to make Pyscho. I was inspired by the physical space of the Verizon building to show Hitchcock’s film.” 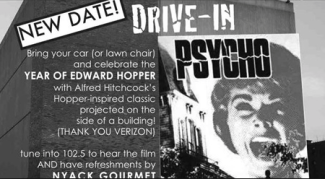 This year Film in the Garden presents: 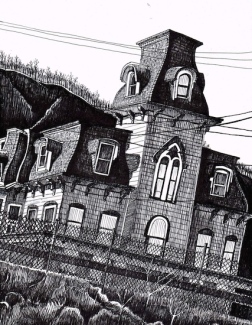 The same community spirit that saved this humble structure from destruction in the 1970s, launched these two popular outdoor art events. The Edward Hopper House was literally a few signatures away from condemnation when an ad-hoc coalition that included neighbors, Rotarians, labor unions, students and artists came to the rescue.  Thanks to a local tradition of historic preservation and the absence of over-development, the majority of the village that you see today is very close in scale and population density to how Nyack was in the early 20th century, when Hopper was a child.

A short walk from this house to the north will bring you to the First Baptist Church, a sanctuary that was founded in 1851 by Hopper’s great-grandfather. The enterprise that generated the income that allowed Hopper to pursue a career in the arts, GH Hopper’s Dry Goods Store operated by his father from a storefront that is now the Grace Thrift Shop several blocks to the South of the family home.

In 1979, former Hopper House Board Chair Alan Gussow wrote “half of all the business blocks standing in Nyack in 1950 were built in the 1880s and 1890s” during Hopper’s childhood. These brownstone brick facades, when bathed in the light reflected off the Hudson, produced the saturated tones that form the color palate in many of Hopper’s most important paintings, such as Early Sunday morning.

Hopper left home after graduating from Nyack High School, but would return to visit his sister, Marion, who lived in the house until her death in 1965. The artist died on May 15, 1967 and his wife of over 40 years, artist Josephine Verstille Nivison passed away a year later. The demise of this entire cohort of the Hopper family over such a short span put the future of the family home in jeopardy. After Marion’s death, the house became an abandoned eyesore inhabited by squatters.

When Jeffrey and Barbara Arnold intervened to save the house of their late neighbor Marion in 1970, a real estate investor with plans to demolish the home and build apartments had already purchased the property from the Hopper Estate. The Arnolds were able to raise $15,000 from gifts and interest free loans from concerned citizens to buy back Hopper’s house.

But that was just the beginning of what local architect and historian Win Perry calls the greatest and most exciting adventure of his life. Perry volunteered to coordinate the restoration project.  The steady stream of individuals and organizations that answered the call to save Hopper’s house and appeared at the work site to lend a hand must have resembled an Amish barn raising. 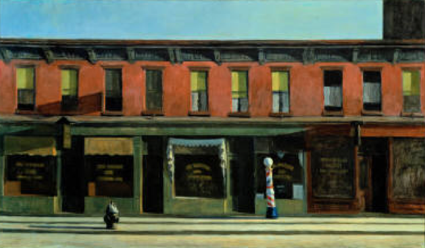 Edward Hopper celebrated the essence of his hometown on canvas, making our village globally recognizable.  If these volunteers had not returned the favor, we would not benefit from the cultural pilgrims from around the world who come to Nyack to see what made Hopper happen, and the community wouldn’t have summertime jazz and cinema

Special thanks to Art Gunther for his essay on the restoration of the Edward Hopper Arts Center that was published last year in a  fortieth anniversary commemorative brochure entitled “The Edward Hopper House, Beginning, Achievement, Future: A tribute to Our Founders.”

For those who want to learn more about the private life of the reclusive artist, I recommend Gail Levin’s “Edward Hopper an Intimate” Biography, Rizzoli, 2007.