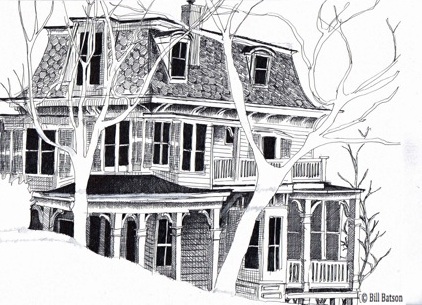 I adore alliteration. So when I saw a flyer promoting a writers circle called River River, I took the bait. Sure, I love the Hudson and all bodies of water that keep rolling along. But this title was not about a river. River River promises poetry.In a world where overheated polemics scorch ears and singe eyeballs, I am thirsty for nuanced language, open for interpretation. Then I saw the subject line announcing their most recent digital journal, “A user guide for undead neighbors.” I was hooked. Brothers and sisters, snap your fingers for River River, and co-founder, Anu Amaran. 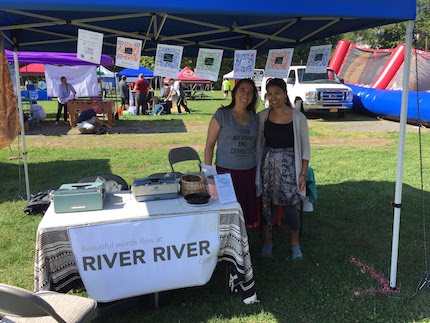 What is River River?

River River Writers Circle is a nonprofit literary arts organization, the existence of which occasions writing salons, open mic events, readings with award-winning authors, workshops, and an online journal of new writing and photography. We’ve been shepherding itinerant bands of poets and writers in Nyack and our lower Hudson valley environs since 2015.

Was there something in your development as a poet that led you to start River River? 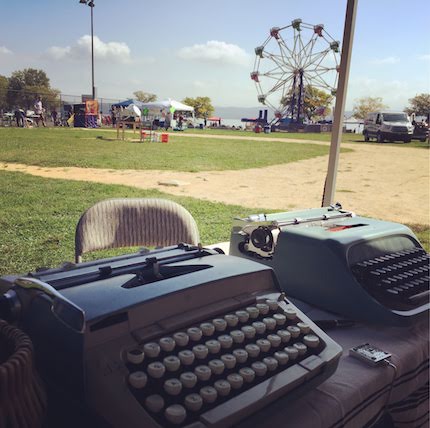 I don’t really think of it that way. It’s truer to say that River River started up because of other poets. I sensed the need, and, since no one else was doing it, the job fell to me. In my own development, though, I had been reading works by some tough American poets, like Ai and Jane Hirshfield and Reetika Vazirani and Jean Valentine, for my MFA thesis. And philosophers Krishnamurti and Wittgenstein. Since I was wading way deeper than the sugar-coated poetries I’d known before that, the need for a practice of grounding oneself in community became crystal clear. I also felt that developing a stronger, better-educated audience for fine literature and the work of independent presses in this country would require more local organizations across the landscape. We are a necessary part of the arts ecosystem.

Who are some of the other founders of River River? 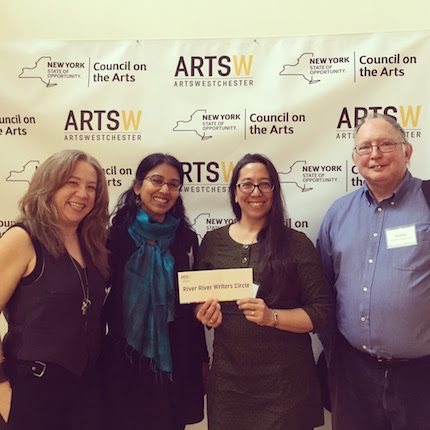 My co-founder, Donna Miele, was the first to step up and start planning, organizing, and hosting events with me. She is a fiction writer, teacher, lawyer, and co-owner of CILK119/Cuppa Pulp Writers Space in Nanuet. David e. Bell, a local writer, photographer, consultant, and sailor (and more) also provided lots of support as we worked through the brainstorming and trial-and-error of building a nonprofit organization.

Where did you get the name?

The name is a kind of translation of what a literary community was called in my south Indian tradition. In Tamil, the word cankam (pronounced “sangam”) refers to legendary gatherings of poets, scholars, sages, and patrons in ancient times. This word comes from a root in Sanskrit meaning “a confluence of rivers.” It’s the same root for the word sangha, which refers to a meditation community. Interestingly, I learned from my geologist friends that Nyack used to be a site of confluence, which is why there’s a natural break in the palisade here along with the wide, silt-filled shallow of the Tappan Zee. 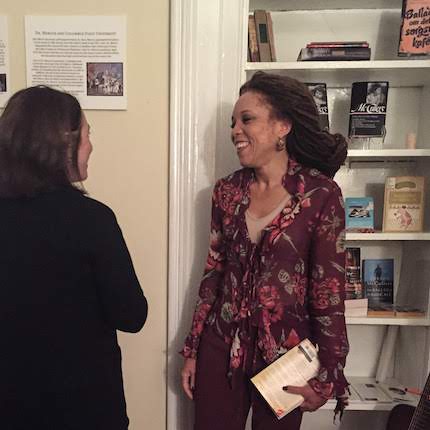 How did River River form?

I had been running an informal writers’ salon at my house for a couple of years (also known as the Saturday-night Indian-food orgy and reading), and the writers who were regulars at that series were my inspiration for the organization. Bryan Roessel of the Rockland Poets, Rosemary Farrell and Laurie Needell at Nyack Library, Cherie Raglan, and Alison Stone, who have all worked on aspects of the local literary scene, joined in this early incarnation. I felt that the lack of an established literary arts organization in Nyack was holding us back. As a nonprofit, 501(c)3 entity, we have been able provide some fiscal sponsorship and programming assistance to groups running specific literary programs, like local artist Katie Elevitch’s women’s storytelling project, which was awarded a Rockland DEC grant from the New York State Council on the Arts, with our help. 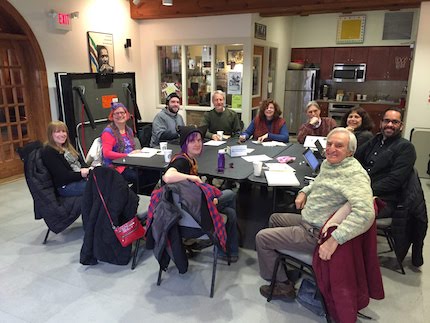 What does River River do?

Whatever the writers around here want us to do. Writers are by definition very independent-minded people, and it’s often difficult for us to gauge what they really want or need in their organization. We’ve found that the writing salons and the readings series are popular; everyone has come to expect them now. Our literary journal is also a huge effort for us to produce and edit, but it’s worth it to be able to showcase local writing alongside the submissions we receive from around the world. We get people to listen to each other properly.

Am I the only one that loves saying River River? Is there a comma?

No comma! I’m not sure if people like saying it, but if we’re doing our work properly maybe there is a bunch of writers who like thinking “river river….”

Local author Holly Caster writes about all things entertainment in Please Be Seated on Nyack News And Views. Whether you cue up to watch it in line or online, Holly has entertainment recommendations and insights about what is new and what you might want to rediscover.

What work are you doing with McCullers House? 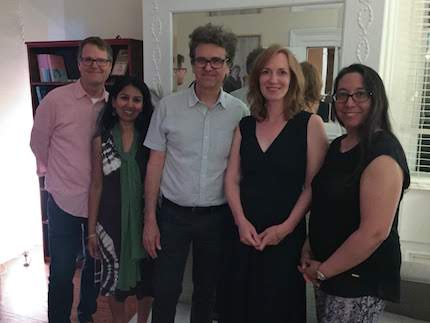 The director of the Carson McCullers House, Nick Norwood, has been wonderful to work with in developing plans that align with River River’s programming goals. We’ve collaborated on readings and open mic events, and one of our weekly writing salons meets in the house. Our members certainly appreciate the particular inspiration of McCullers’s work and legacy by participating in our joint programs. We’ve also brought teen writers into creative engagement with her writing, and plans are underway now to do more of that in the fall. It’s been a very fruitful partnership between organizations for our Nyack community.

Any events coming up? 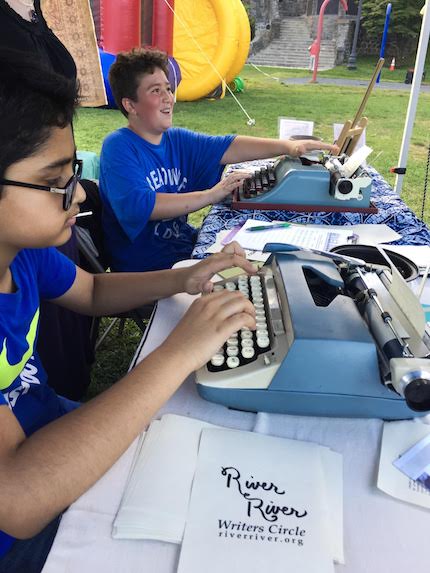 Always! The next reading in our 2018 series is coming up on Sunday, July 15 at 3 p.m. in the gallery 95 ½ Main. We’re hosting two amazing writers: Mary-Kim Arnold and Suzanne Parker. Their bio information is available on the events page of our website, RiverRiver.org. We’ve also put together a “summer excursions” schedule for our writers, including writing sessions at the Dewint House, Storm King Art Center, and Lyndhurst. Our environmental writing and travel residency in Vietnam is open for registration right now, and that group of adventurers will start on a program of preliminary writing and research this fall.

How can someone join your writers circle?

Just show up! Anyone can join. Most events are free and open to writers working in any genre. Our writing salons offer a noncompetitive and welcoming space in which everyone is invited to generate new work, share their creative efforts, and enjoy camaraderie with fellow locals. Writing in community encourages practicing discipline in creativity, increasing confidence in the voice, and listening to one another with positive attention and intelligence. 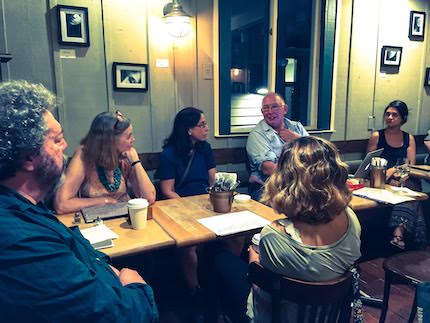 Our events calendar is updated regularly with special events and our schedule of salons. We publicize things on social media, too, so we should be pretty easy to find.

Tell us about your upcoming residency?

We are offering a travel residency to Vietnam, in collaboration with an NSF-funded science workshop by a friend of mine who is a climate researcher at Columbia University’s Lamont-Doherty Earth Observatory. Briefly, writers will join in discussions comparing and contrasting scientific methods with aesthetic methods of inquiry, will present short talks on environmental writing and landscape-oriented literature, and will gain insight into writing about travel experiences. We plan to spend a few 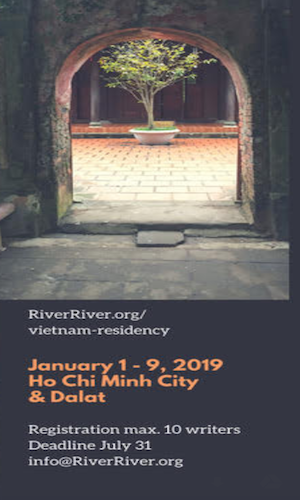 days in the inspirational central highlands landscape of Bidoup Nui Ba National Park, near Dalat, Vietnam. Bookending the trip will be our arrival in Ho Chi Minh City (formerly Saigon), where we will take excursions to museums and other sites along with our generative writing workshops, and at the end of the residency two days in Dalat, exploring the cultural heritage of this former French colonial hill station and surrounding region.I visited these places in December, and the welcoming attitude of our hosts impressed me. We learned to say “thank you” in Vietnamese pretty quickly, because we were saying it a lot. I have organized a writers’ residency in Slovenia, and some of the same reasons that made it a rich experience also apply to Vietnam. For instance, the language presents a barrier in both places, so our writers must become very conscious of language and our reliance on the English language. History and current challenges in these locales make a deep impression because we encounter perspectives and specific details by direct experience, outside of our American stories. 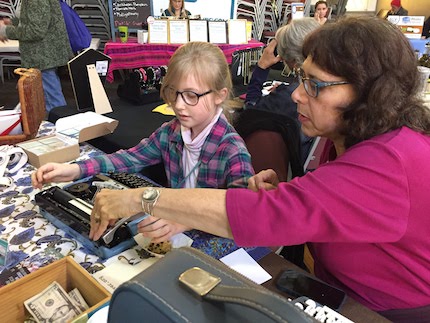 We’d like to include students in this residency, so we are running an online fundraiser to offer scholarships. Any writer with an interest in environmental writing is welcome to join us. I’m looking forward to learning too, right along with everyone else on the trip.

How has social media and the internet effected poetry?

It’s been a boon to poetry. Social media and the internet make distribution so much easier. Recently I read that 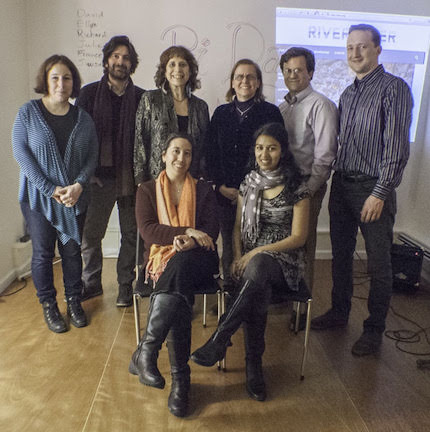 the rate of poetry reading by young people is up significantly in the past few years. Just goes to show that we poets have not been wallowing in metaphoric mudholes of obsolescence. (Yes, I’ve been accused of that.) We’ve just been waiting for people to wake up to the lovely rivers that are still running undammed inside the human soul.

What is a flash poetry mob?

Well, the way we do “flash poetry” doesn’t actually create a “mob.” More like a series of doubletakes as passersby realize that there are some people typing on manual typewriters, and then realize that those people are typing poems. And then, not poems from stale memory or anything, but freshly imagined and composed and typed in a few minutes. In a flash of inspiration. Anyway, I think a mob would overwhelm our antique technology. 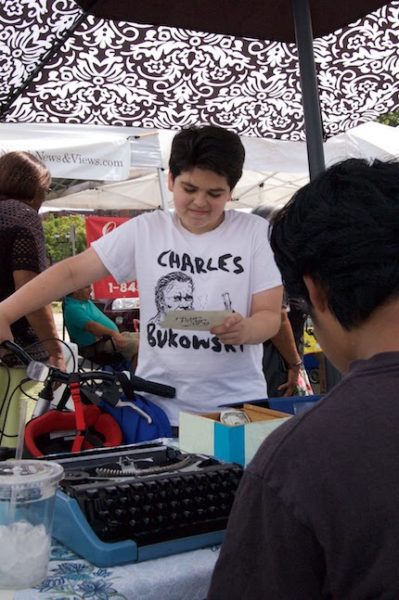 How many members do you have?

We don’t have a membership model at River River because we are interested in the openness, the boundarylessness of community writing. Between our events calendar and other media, we have a following of around 650 locals who are interested in what we do. The journal attracts hundreds of submissions of poems, stories, essays, and art for each issue.

Some of our regulars have been published in the journal. Stop by RiverRiver.org and look for titles by Juan Mobili, Katherine Dering, Julie Goldberg, Celeste Rose Wood, and Steven Swank. Our blog also publishes a “borrowed pages” feature, which highlights some of the writing that comes out of our writing salons. Or stop by Patisserie Didier Dumas around 8 p.m. on most Wednesday nights, and you can hear their readings hot off the crepe pan of imagination.

I’m glad I don’t know. The story (or poem) is more exciting when the action keeps you guessing. But the best ways to find out are to join our email list, follow our events calendar on Meetup.com, or keep in touch via social media. Or come on by and just write with us.Bill Batson is an artist, activist and writer who lives and sketches in Nyack, NY. Nyack Sketch Log: ” River River Writers Circle“ © 2018 Bill Batson.  To see more, visit billbatsonarts.com