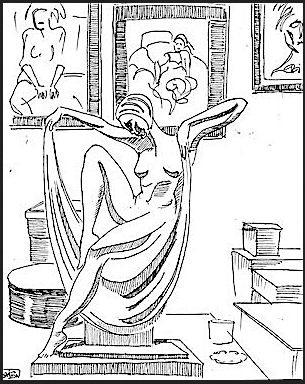 Life-long artist Elaine Schloss was one of the earliest antique dealers to open shop in Nyack. Now, she’s one of the few to endure. You can visit her establishment,“My Own Little Corner Antiques,”  Wednesdays through Fridays from 1:30 to 5:00p at 142 Main Street. Schloss now exhibits her paintings and a selection of local visual artists among the diminutive collectables that line the counters, cabinets, shelves and floors of her store. The current exhibit has been extended through July 21. As a merchant who got started at the first Nyack Street Fair over 40 years ago, Schloss symbolizes many of the cultural trends that make our village unique.

“I have been an artist all of my life. When I was 12, I used to copy pictures of ballerinas,” Schloss said.  “I never went to art school.  I never thought of it as a career. I was a writer.”

Schloss worked as a publicist for WPIX and 20th Century Fox. She’s written children’s plays and musical theater and is an actor and singer.

But she was always making art.

“I love the drama of color and line. Sometimes my work is realistic, sometimes I work in semi-abstract forms. But it has always been about the face and the figure, the emotion and the form…and color.”

Schloss became interested in antiques at the very first street fair in Nyack organized by the Arts, Crafts and Antique Dealers Association in the early 1970s, a time when antiques were hip.

“I had a ring that I hated, and I went to the street fair and I saw a ring that I loved and I asked if they would trade. I got more value than I paid and I got something that I really loved, so I said this is an interesting thing.”

Soon after that epiphany, she opened a store on 9w before moving into the Franklin Avenue Antique Center 40 years ago.

“Back then I was  a picker, like the show American Picker. I would go to antique shows and swaps and garage sales, to find things that I loved, buying from one venue and selling it to another.” For 35 years, she shared her space with Marge Clark, who recently retired.  “It’s such a joy to find something old that was handmade and that someone wore, that has history. I believe that objects of beauty hold the personality of the people who touch them, when you find something beautiful, when you hold it and look at it, there is magic.”

When Schloss opened her shop, Nyack was a regional antique center. “There have been a lot of changes.  Lots of places are closing.  Mostly because of the internet and eBay.  There used to be forty shops in Nyack like mine. Now there are only five.”

In describing her inventory, you can hear the writer and the artist: “I have all sorts of small collectibles .. the kind your grandma, or mother, or you (depending upon your age) have played with, worn, admired, adored, wished you’d had. Unlike the internet, which is glutted with things for sale which are disappointing when they arrive in the mail, my shop is a place where you can see, touch,

even smell, the history and beauty, the heft or the almost impossible delicacy of yesterday … the woman’s flowing figure, or a blown glass vase (cased lemon-yellow outside, lime inside), or a Madame Alexander princess doll, or a tiny Victorian wooden doll’s cradle, or a piece of jewelry, or an Art Nouveau  inkwell with a woman’s head and hair flowing around a jade center .. or a museum quality, curiosity … a “fluter” a heavy metal two piece gismo made to iron those 1900’s ruffles into men’s collars and cuffs … or see a lovely 1930’s painting, or a child’s book from 1900 — all pieces of history.”

Several years ago, Schloss moved to a new space in the Franklin Street Antique Center, enabling her to expand her space and walls into a long-desired gallery.  The art gallery brings together the two passions that have fueled Schloss for decades, art and antiques.

The urge to make art and connect people to objects of art is captured in a comment Schloss heard after a dance performance many years ago. “I went to the Joyce Theater, at the end they had a talk back with the dancers. A women in a wheel chair spoke and said that when she looked at the performance, she thought she would feel bad because she’s in a wheel chair, but she didn’t  because ‘I’m dancing with you.’ That’s how I feel about art.  When someone looks at your painting it brings them to the moment of creation. They feel what the artist felt, the power and the joy of turning paper or canvas or glass into something beautiful, or thought provoking, or spiritual.  That’s why people buy art.  People want to bring home something that transports them.”

Schloss has chosen three outstanding local artists to show along with her own work during this exhibit was extended through July 21, 2018: 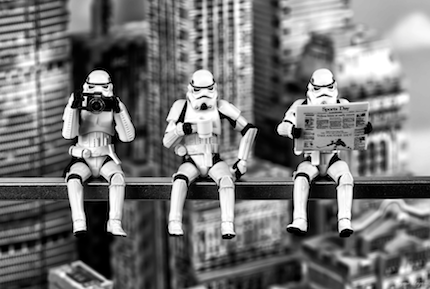 Inspired by the highly imaginative work of Salvador Dali and the experimental, satirical compositions of Frank Zappa, Eugene Lagana likes to create artistic stories with surrealism. Eugene began his career in technology, which has a huge influence on his body of work. Experimenting with new hardware and photographic techniques has resulted in innovative works of art.

Continuing to read books, watch training videos and participate in photography classes, he always considers himself a student of photography. Eugene says the most enjoyable part of showing his work is answering technical questions about his photographs and observing people’s reactions when they see one for the first time. 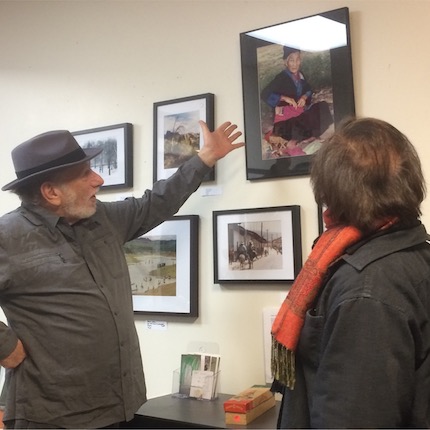 Bern Cohen is an accomplished actor and artist. One-man shows of Cohen’s work, particularly his images of Southeast Asia and Southwest USA, have been at galleries throughout New York including The Madrigal Gallery (Nyack), Blue Gallery (Saratoga), The Factory Gallery (Middletown), The Courthouse Gallery (Goshen) and The Happy Dog Gallery (Piermont). Simultaneously, Cohen created a children’s book for National Geographic, “Wonders of The Desert,” which gave him a body of Southwestern images.

During most recent years, Cohen’s movie and TV acting career has grown to where it limits his involvement in photography shows to Nyack, his now home-town. He currently has acting roles in such hits as The Marvelous Mrs. Maisel and Norman, and was recently in a comedy sketch on The Jimmy Kimmel Show. Cohen is now working on a photo project about women in non-traditional jobs and is also organizing a book of his Asian photography. 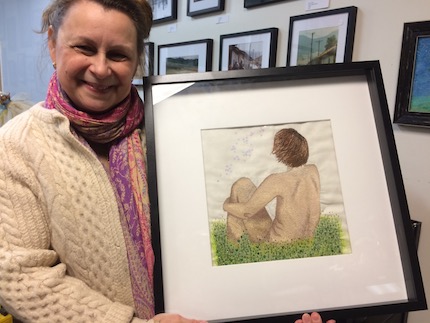 Donna Davies Timm, a native of Great Britain, has lived and worked in New York for the past 20 years.She studied Surface Pattern and Textiles at Cumbria University, UK, specializing in Tapestry Weaving. Over the past 20 years Donna challenged and expanded her creativity into other forms of textile art, constructing and embellishing customized costumes for historical re-enactment and theater.  Her artistic creativity is expressed in her love of watercolor painting, figure drawing and free style embroidery or “thread painting.”

My Own Little Gallery is located inside My Own Little Corner Antiques at 142 Main Street in Nyack. You can reach Elaine Schloss at hazelhazeltwo@gmail.com or 845 353-3341.