Where in Rockland County can you find the Thorny Passage or the Gate Leading to Nowhere and Everywhere. In a fantasy written by J.R.R Tolkien or J.K. Rowling on the shelf of a local library? On a stage, as the name of an obscure work by Edward Albee or Samuel Beckett? If you guessed a converted turkey farm in West Nyack, you’d be right. These landmarks, christened by children, are on the grounds of the Blue Rock School, a K-8 learning community where kids play and imagine as hard as they study.

The main building at Blue Rock has a fairy-tale quality.  Once -upon-a-time a turkey farm, the property was purchased in the 1930s by Clare Potter, the fashion designer credited with creating American Sports wear and her architect husband, J. Sanford Potter. They called the place where they designed clothing and buildings Timbertop, which became the name of her clothing line. Residue from their sartorial and architectural endeavors must have enchanted the soil. Found object sculptures, a totem pole, and the rough-hewn seats of an outdoor amphitheater have risen up on the land where turkeys were once raised.

Blue Rock School is the fourth incarnation of the educational vision of Margaret Flinsch, the grandmother of the current Director Caty Laignel. Flinsch created her first school in Princeton, New Jersey in the 1920s. She was inspired by the needs of working class women. Flinsch sought to “help mothers who had to make a choice between the income they so desperately needed and the care of their children during working hours,” according to the Princeton Nursery School website. When African American families registered, initial funding was withdrawn. “My grandmother was horrified. She confronted that prejudice. She forged ahead and was able to found the school,” Laignel said.

Decades later, while working with parents and teachers in North Carolina in 1982, Flinsch incorporated her humanistic and creative approach into a school that took its name from the blue rock face on the mountain above the original school house in the Blue Ridge Mountains.  As a  progressive and teacher driven educational model, when many of the transplanted New York staff members longed for home, the school was relocated; first to the historic one-room school house on Oak Tree Road in Palisades in 1987 and then, to Clare’s turkey and fashion farm in 1990. Flinsch remained active in the school throughout her life, attending meetings up to the age of 102.

Laignel has been at Blue Rock for 18 years. Her background is with arts education and performance organizations. In addition to running the school, Laignel leads the drama program. “Teachers strike the philosophical tone of the school. They are passionate people, continually invested in how children learn across all subject areas,”Laignel said. 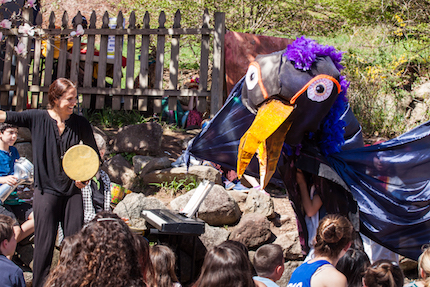 In keeping with some of the best practices in education that prioritize problem solving and play, Blue Rock students can be found outside year round, no matter the weather. Even on clear days, rain gear is on stand-by, in case skies turn gray. “The children are very hands on at Blue Rock. Working hard. Raising chickens. We have a garden. We participate in clean up. It’s about having agency and making an effort, feeling your own power to make change,” Laignel described. 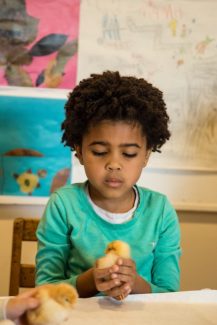 While you can track mud into the classrooms, digital devices must be left at home  “Already, around the founding of the school in the 80s and early 90s there was a lot of concern about children and television. About children becoming passive, and being exposed to commercial interests, about children searching externally for happiness apart from their imaginations and play,” Laignel said.

Their stated goal is to create a secure setting where children can discover, for themselves, the relationship between ideas, skills and expression. Their literature describes the school as a place where thoughts, feelings and aspirations are developed through relationships with teachers and peers.

Flinsch was informed by Marie Winn’s “Unplugging the plug-in drug.” A television producer, Winn argued that watching too much television can be detrimental to a child’s development and to family life. “I grew up with passion for books. I was brought up on story telling,” Laignel said. 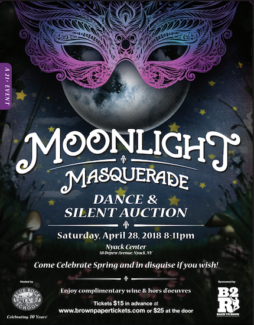 On Saturday, April 28th the Blue Rock School will celebrate its 30th Anniversary in Rockland County. Free and open to the public, the teachers will host workshops and collaborative art experiences, older students will share their projects and alumni will speak. In the evening there will be a Moonlight Masquerade Dance and Silent Auction at the Nyack Center. For more information on the day and tickets for the dance click here: 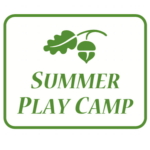 Each year at Blue Rock starts with a story, told by Laignel, that is based on a theme developed by the faculty.  Last year the theme was India. This year’s theme is indigenous people all over the world. A recent play was staged that explored, Native American, African and Mayan cultures.

“We focus on the self and the community, on emotional health and collaborative skills, the ability to live with others, what we call grit, the effort muscle, resilience and powering through. Learning is when you make mistakes and keep trying and figure it out. This approach has led our graduates to excel in various fields. They are interested in learning and have the essential skills that apply whether they become scientists, writers, doctors, architects or artists” Laignel said.

In 2012, Hurricane Sandy provided Blue Rock a lesson plan in resilience. “Our school lost eleven trees, a van, and a well-loved tree house built by the Middle School,” Laignel told Natural Awakenings Magazine. “Given that no one in our school community sustained injuries, we felt extremely grateful as we put the school back in shape over the next week. On our first day back in session, the children and teachers gathered together for a story that highlighted the importance of cherishing our time on earth, the need for change in the cycle of life, and the impermanent nature of all things. Everyone then headed outside to help clear the play areas and grounds. Wishing to get their play spaces in order to return to favorite games and activities, the children took on the clearing of brush with great gusto and camaraderie,” she continued.

The environs of the school, shaped by the winds of extreme weather and the hands of current or former students was the model for a collective landscape portrait project in April 13.  On that day, I organized a Flash Sketch Mob at Blue Rock School, a public art event that was inspired by the Nyack Sketch Log.

On most days, the energy at Blue Rock is a throw-back to the time before technology relegated children into their own digital silos, when summer vacations and weekends witnessed a pack of indefatigable children in perpetual motion. But when given the task of observing and recording the school, the intensity of each student’s focus was astonishing. “There was a happy buzz all day about how quiet, focused  and peaceful the children all were during the sketch mob,” Laignel said.

The photos taken of the Flash Sketch Mob by Kindergarten teacher Lucia Gratch begin to capture the playful and profound spirit of Blue Rock School. I suspect that every day in this magic kingdom imagineered by 89 students and 20 staff members has a similar vibe.

When you visit Blue Rock School, you’ll be startled at how quickly you’ll find yourself transported to that recent analog past, where learning meant getting your hands dirty building a fort, crawling through a thorny passage and opening up a gate to nowhere and everywhere.

On Saturday,  April 28th the Blue Rock Scchool will celebrate its 30th Anniversary in Rockland County. Free and open to the public, the teachers will host workshops and collaborative art experiences, older students will share their projects and alumni will speak. In the evening there will be a Moonlight Masquerade Dance and Silent Auction at the Nyack Center. For more information on the day and tickets for the dance click here: