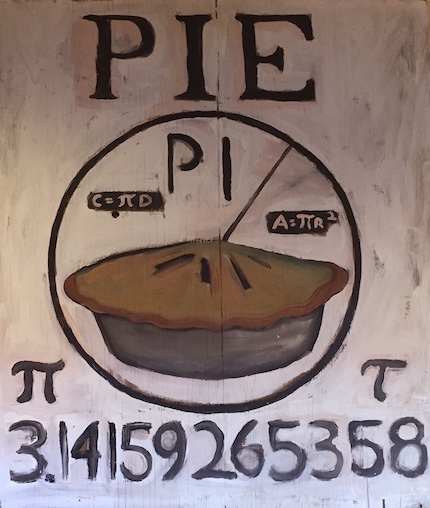 Thirty one years ago, physicist Larry Shaw rebranded March 14 as Pi Day to celebrate the infinite number 3.14159265359. In an example of coincidence that must annoy scientists, March 14 is also Albert Einstein’s birthday.  Locally, Pi Day is not just about bringing math education to the masses, it’s also all about adding an “e” to the equation and ordering up some pie.

Wil Tyler, the owner of Pie Lady & Son, has been observing Pi Day for last 7 years.  A Pi painting by Peter Cheney, which includes 11 digits after the decimal, hangs in his 9w flagship store year round. “When you have all of these delicious pies, you need to bake a few more pie eating holidays into the calendar,” said Pie Lady owner Wil Tyler.

Deborah Tyler, Wil’s mother, had 300 pie orders to fill in the Fall of 2001. The single mother of three had converted her one floor rental into a Department of Health approved commercial kitchen.  A New York Times review and a Good Morning America segment were bringing in business from both sides of the Hudson River. It was at the height of her notoriety that Deborah sold her equipment and moved to Cooperstown. Here is the story of how the popularity of their pies once imperiled the Pie Lady and now propels the Pie Lady & Son.

From 1995 until 2001, if you were in the know, or you stumbled upon the hand painted sign that said “Pie” on Piermont Avenue in Nyack, New York and followed the arrow, you would arrive at Tyler’s back porch.  If it was a busy day, she might have her youngest daughter Carly under her arm as she took your order. If apple pie is the closest thing we have to a national dish, serving the iconic desert from a kitchen door is pure Americana.  The scene on the corner of Spear and Burd Street, where Tyler sold her pies, was straight out of a Norman Rockwell painting.

Tyler calls her style of baking vintage.  When it comes to cookbooks, she prefers the Betty Crocker era. She cuts butter with her hands and uses as few ingredients as possible. Her approach to cooking comes from her family, who emigrated from Europe in the early 20th century and settled in Montana. Baking was practiced as an essential prairie craft: Mondays were for washing, Tuesdays for ironing, Wednesdays for mending and Saturday was for baking.  Tyler learned to bake from her mother, Maybelle, who was one of 11 children.

When she moved to Burd Street she was on her own with three young children. Baking was a way to earn Tyler some extra money. But as soon as the sign went up on the corner of Piermont and Burd, word of mouth drove business in her direction faster than Deborah could manage.  Her brother helped her convert her son Wil’s bedroom into an extra kitchen.  Her upstairs neighbor offered additional space.

The renovations and kitchen sharing were all done with the blessing of her landlord, Joe Lagana. Deborah acknowledges without the people of Nyack she would have never found success. The village even gave Tyler her name.  She tried in vain to get people to call her business “the pie kitchen.” But from the moment she started selling baked goods from her back porch she would be affectionately known as the “Pie Lady.”

The Pie Lady would eventually become a victim of her own rapid growth.  As the orders poured in, she wanted a business partner to appear: someone to handle the administration, leaving her to the baking.  But a culinary comrade never emerged.  The only thing that arrived was more business.  By 2001, exhausted and unable to keep up with the demand, Tyler closed shop and moved to Cooperstown.

Her son Wil, who gave up his bedroom for years to allow for kitchen expansion, immediately wanted his mother to reconsider. He took a job in marketing out of high school but his heart was with the family business. Wil converted his mother’s recipes from index card to computer files and traveled to Cooperstown for baking lessons. He also convinced his sister Brianna to help obtain a home food-processing certificate from the Dept. of Agriculture for his apartment in Upper Nyack.

Wil and Briana’s efforts were enthusiastically welcomed when baked goods labeled “Pie Lady” were spotted at The St. Ann’s Holiday Bazaar in 2009. Their next step in the rebirth of their brand was a booth at the Nyack Chamber of Commerce’s Farmer’s Market in 2010. Together the siblings were making 30 pies a week and were feeling quite proud of the results. They outgrew Wil’s apartment and were working out of rented kitchen space at the Fellowship of Reconciliation, when Deborah came to check on their progress. She was impressed by their zeal, but not as pleased with the product. Since that visit, Deborah has made a weekly trip back to Nyack to oversee production. 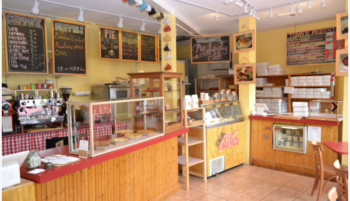 After a second successful season at the Farmer’s Market, Wil followed a tip from ACADA‘s Jack Dunnigan and found a rental space on North Highland near Nyack High School. The Pie Lady & Son now has a staff of five, operates a retail facility and sells their goods at several markets throughout the region.

The legacy of neighborhood support is baked into their menu. One item “Mrs. Cooke’s Sweet Potato Pie” is named after Burd Street neighbor Elizabeth Cooke. The wife of the late Commissioner of the Nyack Water Department Leonard Cooke, Mrs. Cooke lent the recipe for her namesake pie and helped look after Deborah’s daughter when the line at the back porch kitchen door got too long.

There is nothing secret about the Tyler recipe for baking or success.  Community support is like yeast, the love of family is the filling and the crust is just the right proportion of flour, water, salt and fat.  The reign of the Pie Lady is over:  long live The Pie Lady & Son.

The Pi painting is by Peter Cheney